‘Urinetown: The Musical’ To Reflect on Current Events 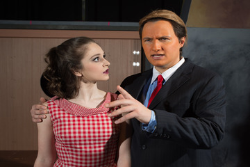 
When arranging the productions for this school year, associate professor Deena Conley wanted a change of pace after February's “Crazy For You,” a lighthearted romantic musical comedy.

On one hand, as director, she wanted to give her students a chance to perform in a modern musical that poses artistic risks and challenges for the actors. On the other, she realized that the current political environment offered an opportunity to put a brand-new spin on a show that premiered in 2001.

“Urinetown: The Musical” continues for a second weekend in the Lab Theatre at Dowd Fine Arts Center. The show, which opened on March 31, will be performed at 8 p.m. on Friday, April 7 and Saturday, April 8, and at 2 p.m. on Sunday, April 9. Tickets are available at Cortland.edu/boxoffice and are $19 for the general public; $16 for faculty, staff and senior citizens; and $9 for students. The shows are expected to sell out and it is recommended to purchase tickets in advance. Seating is limited and unassigned. Theatregoers are encouraged to arrive early for the best choice of seats.

The character of Caldwell B. Cladwell is the musical’s villain. Cladwell, who will be played by senior musical theatre major Sean Noonan, is the CEO of Urine Good Company. An extreme water shortage leads Cladwell’s company to install for-pay public toilets, which generates the drama between the wealthy and poor factions in the musical.

“I didn’t know last year when I chose the play that Donald Trump was going to be president,” said Conley. “I think most of us probably thought that wasn’t going to happen. Good or bad, we didn’t know that was a real possibility on either side. Once that happened, it was like kismet. I saw a connection there that I thought we could explore. I’m not changing any of the dialogue. I’m not changing any of the music. I am highlighting in certain numbers the way I think a leader of our country may interpret those numbers.”

For Noonan, the parallels between the plot of the musical and current events make his portrayal of Cladwell an exciting challenge. He might look a bit like Alec Baldwin as President Trump on “Saturday Night Live” with the wig and a broad, red tie, but the similarities, at least visually, stop there. The object of playing Cladwell as Trump is to allow the audience to similarly think of the rest of the characters in real-world terms, highlighting the themes and conflict at the heart of the musical.

“How could you do it without (Trump)?” Noonan said. “I think it’s really funny how the sociopolitical climate can really impact a show and what we’re doing with it.”

The musical’s protagonist is Bobby Strong, who leads a pee-for-free rebellion against Cladwell and ultimately falls in love with Cladwell’s daughter, Hope Cladwell. Sophomore musical theatre major Matt Henningsen, who plays Bobby Strong, is energized by “Urinetown’s” ability to strike a chord with its audience.

“The whole point of live theatre is to connect with the audience on a more personal, human level,” Henningsen said.

Elizabeth Earle, a sophomore musical theatre major, plays Little Sally, a street urchin who serves as the musical’s co-narrator. Her character explains the nervous perspective of the have-nots, which Earle feels might resonate with a college-age audience.

“Urinetown” also parodies musical theatre conventions and works to break down the fourth wall, a conceptual barrier between the performers and the audience.

“It’s almost the opposite of everything I teach in acting classes,” Conley said. “I teach acting and directing, so I wanted something that really challenged the students to play with this genre of talking to the audience. It’s very large and huge while staying absolutely rooted to creating a character.”

For junior musical theatre major Emily Woods, who plays Hope Cladwell, satire has been a major shift from her background, but she is enjoying the challenge.

“I think “Urinetown” as a show is very different from anything else I’ve ever done,” Woods said. “I’ve been in plenty of shows here and I’ve worked regionally. There are bits and pieces that are making fun of other musicals, so it’s a really new experience for me but I’m really enjoying it.”

“Urinetown” is a musical with plenty of thematic issues to unpack. Its ending — no spoilers here — is certainly unpredictable. The final note makes the musical ripe for interpretation and discussion on either side of the political and economic aisle.

“The end of the musical is really important to keep in mind,” Conley said. “The ending isn’t as cut-and-dried as the play leads you along.”

Senior musical theatre major Kayla Arias plays Penelope Pennywise, who runs the poorest public urinal. Sure, it’s a thought-provoking musical with serious political and economic undertones but Arias has thrived on the humor of it all during early rehearsals.

“Urinetown’s” appeal is broad. Those in search of meaningful commentary on current events, musical buffs looking for self-referential satire and others who just want a laugh will all find something to like in “Urinetown.”

“I personally can’t stop laughing — I probably should stop laughing — while we’re trying to act,” Arias said. “It’s so funny and it will be good for the audience to escape the real world and all the stuff that’s happening and just come laugh for an hour and a half.”