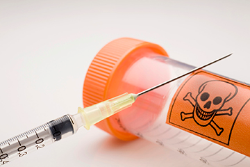 
Herbert Haines, a SUNY Cortland sociologist and noted authority on the death penalty, will give a talk on the potential for the 70-year long, world-wide trend away from executing criminals to take a sudden U-turn, Wednesday, Nov. 7, at the College.

Haines, a professor in the Sociology/Anthropology Department who earned the 2018 SUNY Chancellor’s Award for Faculty Service, will present “Capital Punishment and the Rise of Right-Wing Nationalism.”

A member of the SUNY Cortland campus since 1985, Haines’ areas of specialization are crime policy, criminology, interpersonal and collective violence, social movements and social problems.

Haines asserts that, since the middle of the 20th century, capital punishment has experienced a broad decline throughout most of the world.

This has left the U.S. isolated among Western democratic states in its continued use of the death penalty and has exposed it to pressure and ostracism.

“But the recent rise of right-wing ethno-nationalist parties, particularly in Western Europe, threatens to reduce that pressure and even to reverse the 70-year global trend away from judicial executions,” Haines said.

He has made many presentations at regional and national conferences, as well as in classes at area colleges and universities and before community groups.

He is a proposal reviewer on death penalty and medical marijuana related research for the National Endowment for the Humanities and the National Science Foundation.

Haines has a doctorate in sociology from University of Kansas, Lawrence. In the community, he has served on the board of Catholic Charities and was a member of the Cortland County Family Dependency Treatment Court Team.

When the series continues in Spring 2019, humanity’s different ideas about death and America’s discomfort with mortality continue to come into play. Talk topics will include interpreting college students’ deathly fear of the wilderness, intentional self-injury as a mode of suicidal expression, and the role of zombies and gothic ideas in modern Latin American filmmaking.

Sharon Todd, a SUNY Cortland professor of recreation, parks, and leisure studies, plans to explore how current generations, who seem to be spending less and less of their childhood outside, perceive wilderness environments, during a lecture on Feb. 27. Titled “Scared to Death? Changes in College Students’ Fear and Anxiety in Wilderness Environments Over Time,” Todd’s talk will explore changes over roughly the last 20 years in college students’ fears of the outdoors.

OnApril 3, a Spanish language and culture specialist from University at Albany will give a talk on “Newfangled Vampires and Zombies in Latin American Literature and Film.” Carmen Serrano, an assistant professor of Spanish, has studied how vampire and zombie figures have inspired Latin American films since the 1950s.