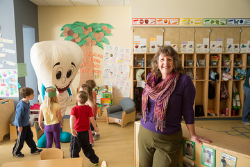 
The SUNY Board of Trustees recently promoted Bonni C. Hodges, a SUNY Cortland professor of health, to the rank of Distinguished Service Professor.

The Distinguished Service rank may only be conferred by the SUNY Board of Trustees on the recommendation of the campus, System Administration and SUNY chancellor and constitutes a promotion above that of full professor.

“Dr. Hodges has given more of her time and expertise to service than anyone I have personally known in higher education,” said Donna Videto, a professor of health at SUNY Cortland. “Dr. Hodges has devoted herself to the campus and surrounding community since coming to SUNY Cortland and has never cut back on these efforts. Rather than shift her activities away from working with others, Dr. Hodges has extended her service reach to the national and international health area as an additional way of ‘giving back’ and supporting our professional goals.”

Recognized for her scholarship and service to the profession on multiple occasions, she was honored with the SUNY Chancellor’s Research and Scholarship Recognition Award in 2005 and received a SUNY Chancellor’s Award for Excellence in Faculty Service in 2009. Hodges is a six-time recipient of the SUNY Cortland Excellence in Research and Scholarship Award (2006, 2009, 2010, 2011, 2013 and 2014) and was honored with SUNY Cortland’s Outstanding Achievement in Research Award in 2014.

Since arriving at SUNY Cortland in 1992, Hodges has dedicated herself to leading the College’s Health Department, serving as its chair for the last 14 years. Hodges guides a department that offers three undergraduate degrees with seven concentrations as well as three graduate degrees. She has chaired a number of department committees, including the Poskanzer Lecture Committee, the Human Services Studies Four-Year Program Development Committee, the School Health Update Committee and the Health Department Curriculum Committee, among others. Hodges served as faculty advisor to Eta Sigma Gamma, Kappa Chapter of SUNY Cortland, the national health education honorary society, for six years.

Hodges contributed to SUNY Cortland’s School of Professional Studies by creating and implementing the “Rockin’ the Research” series, which provides faculty members the opportunity to present their findings to other interested faculty. The “Rockin’ the Research” series is credited with having done a great service for junior, non-tenured faculty by offering a local venue with friendly colleagues. The series has promoted research and discussion between colleagues in different disciplines in the School of Professional Studies and given junior faculty an opportunity to receive peer reviews.

In service to the College, Hodges has participated on many search committees for incoming provosts, deans, directors and vice presidents. She has also served continuously for more than a decade on the College Research Committee, including one year as committee chair. Hodges has chaired the Graduate Faculty Executive Committee, the Teaching Awards Committee and served on a variety of college-wide committees and task forces.

Hodges has advocated for expansions of SUNY Cortland’s study abroad offerings. In 2015, she visited University College-Cork in Ireland and Anglia Ruskin University in Cambridge, England. More recently, she visited sites in northern Cuba in preparation for the College’s first study abroad program there in June 2017. Hodges has explored student and faculty exchanges and opportunities for collaborative scholarly work.

A regular presence at college-wide lectures and talks, Hodges has used these events to help spread her knowledge and expertise. She has presented at “Internal Grants for Teaching, Research and Scholarship Workshops,” the Phi Kappa Phi annual lecture, the SUNY Cortland Faculty Development Series for First-Year Faculty and has delivered three Sandwich Seminars.

“Dr. Hodges has extended support to our district for more than a decade,” said Judy Riley, assistant superintendent for pupil and personnel services for the Cortland Enlarged School District. “She generously gives of her time, shares her knowledge and expertise and works side by side with teachers and administrators in an effort educate students and families.”

Since 2013, Hodges has been an advisory board member for the Cortland Crush, a member of the New York Collegiate Baseball League. She is responsible for its internship program, fan club development and marketing and has infused health education by coordinating a “Health Promotion at the Ballpark” campaign.

“I am certain that every health and human services agency in Cortland County knows Dr. Hodges or knows of her due to her vast involvement in and devotion to the health and well-being of our community,” said Jackie Leaf, executive director of the Seven Valleys Health Coalition.

“Dr. Hodges is clearly a distinguished, national leader in health education,” said Dr. David Birch, president of the Society for Public Health Education. “Through her diverse service and scholarship, she has provided professional development to practitioners, leadership in current issues and initiatives, important service to professional organizations and direction and vision to the profession of health education.”

Hodges received her Bachelor of Science in Physical Education from Ithaca College. She earned a Master of Science in Exercise Science from Northeastern University. Hodges holds a Ph.D. in health education, with concentrations in research and evaluation and adolescent health from the University of Maryland-College Park.

After joining SUNY Cortland as an assistant professor of health, she was promoted to associate professor in 1996 and rose to the rank of professor in 2005. Hodges served as graduate coordinator for the Health Department from 1997-2003 and has been the department chair since 2003.