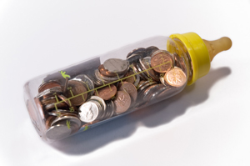 
A SUNY Cortland fundraiser is underway to fill a giant baby bottle with loose change and increase awareness for childhood hunger prevention.

An Adolescence Education: Social Studies class will attempt to fill a 12-foot baby bottle in Corey Union with coins by the end of the semester to support Doctors Without Borders, an international medical humanitarian organization that delivers emergency aid to people excluded from health care.

The imposing, see-through monolith serves as a symbol for the hunger problems faced by infants, said Jim Miller, the faculty advisor of the project and a lecturer of history.

“We thought not only would the baby bottle be a good visual for students to watch fill to the brim, but also a symbol of how many children need our help and support,” Miller said.

In order to reach its goal, the social studies class also has placed regular-sized baby bottles in buildings across campus to make collecting the pennies, nickels, dimes, quarters and small bills easier. Once filled, the change from the smaller receptacles will be dumped into the giant baby bottle, located by the stairwell in front of Raquette Pizza.

SUNY Cortland students staffed tables from Nov. 7 to 18 in Corey Union to educate campus members on childhood hunger prevention and the Doctors Without Borders campaign. They handed out bands that fit around a malnourished child’s arm, to visually display the effects of hunger.

“The doctors can tell the risk each child faces, and what actions need to be taken in order to save the child,” Miller said.

Doctors Without Borders aids people affected by armed conflict, epidemics, natural and man-made disasters. The organization received the Nobel Peace Prize in 1999 and is A-rated by all major philanthropy watchdog agencies.