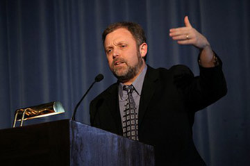 
SUNY Cortland’s Black Student Union (BSU) asked students to voice their thoughts on issues of race last semester. Now, the College is beginning to put those thoughts into action.

On Wednesday, April 13, international anti-racist educator Tim Wise will discuss how to overcome racism in society at his talk “Challenging the Culture of Cruelty: Understanding and Defeating Race and Class Inequity in America” at 7 p.m. in Old Main Brown Auditorium.

The event is free and open to the public.

“We are really focusing on the information students gave us from the town hall meetings and doing something about it,” said Reardon, referring to feedback gained from two all-campus meetings held during the fall semester and organized by the Black Student Union (BSU).

Named among the “25 Visionaries Who are Changing the World” by Utne Reader, Wise prompts his audiences to recognize their own role in co-creating a fair society and fighting the idea of white privilege.

“As capitalism developed, nationally, internationally and then globally, elites often used racism and notions of white supremacy to maintain and extend their powers,” Wise said on his website.

He encourages his audience to stand up in situations that challenge inclusion.

As a college activist, the Tulane University graduate began taking a leadership role with social justice issues when he fought for divestment from apartheid in South Africa. Later he served as a youth coordinator and associate director for the Louisiana Coalition against Racism and Nazism. He also has worked on improving economic inequality and combatting poverty in New Orleans.

From 1999 to 2003, Wise was an adjunct professor at the Smith School of Social Work in Northampton, Mass. He also advised the Fisk University Race Relations Institute in Nashville, Tenn.

Wise has authored numerous books including Dear White America: Letter to a New Minority, White Like Me: Reflections on Race from a Privileged Son, Colorblind, and Under the Affluence: Shaming the Poor. He has spoken on more than 800 colleges and high school campuses and to community groups across the nation.

Visit the website timwise.org for more background on Wise. For more information regarding the event, contact Reardon at jonah.reardon@cortland.edu or 607-753-2178.