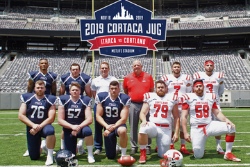 
The 2019 Cortaca Jug game has been the talk of the college football media since it was announced last week that more than 39,000 tickets have been sold. The game will set a new record for attendance for a Division III football game, breaking the mark of 37,355 set by St. John’s University and the University St. Thomas when they played at Minneapolis’ Target Field in 2017.

College Football Talk, an NBC Sports blog, and the Central New York Business Journal were among the outlets writing about the game this past week.