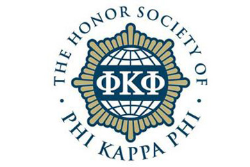 The students, named “Scholars of the Year” by the Cortland chapter, were recognized April 18 in the Corey Union Function Room.

The scholars also each received $50 and were acknowledged later that same day during SUNY Cortland’s annual Honors Convocation ceremony in the Park Center Alumni Arena.

The accolades were based on academic accomplishments as well as leadership and volunteer involvement at the College and in the community.

Founded in 1897 at the University of Maine, Phi Kappa Phi annually initiates about 30,000 new members from nearly 300 campuses in the U.S., Puerto Rico and the Philippines.

Here’s a closer look at the Phi Kappa Phi scholars:

A senior adolescence education: history major, Barbella of Larchmont, N.Y., is committed to bettering not only SUNY Cortland but the communities he lives in.

The son of Angela and John Barbella, he has been an active member of the SUNY Cortland Emergency Medical Services (SCEMS) working as an emergency medical technician assistant.

He also has participated in various Student Government Association (SGA) clubs and roles, including service as the president of the History Club, the SGA representative for Spanish Club, and as an SGA Election Committee member.

He was an admissions ambassador and tour guide for the Admissions Office.

“I put extremely high value on my academics,” said Barbella, who has maintained a 3.98 GPA. In addition to Phi Kappa Phi, he was inducted into the Kappa Delta Pi international education honor society and the Phi Alpha Theta history honor society.

“I feel a great responsibility in being able to represent my family, hometown and SUNY Cortland,” he said. “I constantly strive to place myself in a position where I can make those who support me proud.”

A senior business economics major from Smithtown, N.Y., Brittman has managed to use his college experience as a blueprint for a career that culminates with him as a chief financial officer for a major company.

The son of Elizabeth and Joseph Brittman, he has volunteered as a tax preparer and assistant site supervisor for the Cortland County Volunteer Income Tax Assistance Program (VITA). The program provides taxpayers earning $53,000 or less in taxable income with free tax preparation services.

Brittman also has interned with various companies such as Bestway Enterprises, Inc.

“My driving motivator has been the commitment I have made to myself to achieve these goals,” Brittman said about his career path.

“I plan to interview with the audit departments of the “Big Four” CPA firms with the hopes of receiving an offer to begin my career as an associate auditor,” he said. “My ultimate pursuit is leading the finance department of a multi-national manufacturing corporation.”

He will pursue a master’s degree in accounting in the fall.

Brittman maintained a 4.02 GPA and consistently made the Dean’s and President’s lists. He earned the Economics Department’s Chair’s Award for Academic Excellence.

A senior Spanish and communication studies major, Kelly of Watervilet, N.Y., is dedicated to helping her peers attain and maintain success.

The daughter of Janice and Peter Kelly, she has been a teaching assistant to College President Erik J. Bitterbaum for COR 101: The First-year Experience course which helps freshman with the transition to university life. She is a certified peer tutor for SUNY Cortland’s Academic Support and Achievement (ASAP) program.

Kelly has maintained a 4.09 GPA and has not only consistently appeared on the President’s List. She was awarded the Irmgard Taylor Scholarship, a merit-based scholarship reserved for the student with the highest GPA in the School of Arts and Sciences.

The recipient of a 2015 Chancellor’s Award for Student Excellence, Kelly dreams of a career in student affairs.

“I have realized a passion for working with others, particularly college students,” she said. “I want to work with others to help them achieve their own personal and professional goals.”

She has taken steps towards achieving that ambition by working within the campus community. Kelly has worked in the Campus Activities Office, International Programs Office, Advisement and Transition office and the Public Relations Office.

A senior childhood education and mathematics major from Farmingdale, N.Y., Lopilato has been a champion of volunteerism on campus and charity work within the Cortland community.

The daughter of Laura and Anthony Lopilato, for her high level of civic engagement Lopilato was awarded the Merit Scholarship as well as the Student Government Association (SGA) Leadership Scholarship.

While maintaining her spot on the Dean’s list and President’s lists, Lopilato also is a member FIT Club, the treasurer of Math Club, the captain of multiple intramural sport teams and a tour guide. She also helps youngsters with their homework as a volunteer tutor.

“My goal is and has been to be the best elementary school teacher I can be,” Lopilato said about her future.

“I plan to pursue my graduate degree in special education,” she said. “With this education I will be able to better accommodate each student and ensure that everyone has an equal opportunity to learn and grow in my class.”

The son of Julie Kruszynski and Patrick Penque, he has an active role in promoting well-being not only on campus but in the community as a member of the HealthyNOW Teen Program.

Penque has maintained a 3.89 GPA. He has helped his fellow students on their path to academic excellence as a supplemental instruction leader in three subjects for five semesters. Penque served as a teaching assistant for the College’s Motor Behavior course.

A senior exercise science major, Vogler of Jamesville, N.Y., has integrated her passion for athletics and travel in her college career.

The daughter of Lisa Vogler, she has participated in club basketball and tennis as well as intramural teams such as ultimate frisbee, indoor soccer, volleyball and dodgeball. Vogler has run in various 5 kilometer races.

A teaching assistant, supplemental instruction leader and certified peer tutor for SUNY Cortland’s Academic Support and Achievement (ASAP) program, she has helped fellow students on their path to academic success in courses such as Anatomy & Physiology, Biology and Biomechanics.

Vogler has maintained a 3.97 GPA. She was awarded the Overseas Academic Scholarship and the Willi Ushald Scholarship for her academic pursuits abroad. Having traveled through Europe during the summer of 2014, she recently made the journey to South America.

“I know it will be challenging, but that is what I’m partly excited for,” Vogler said.