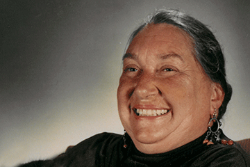 
In 1961, the late Professor of Sociology and Anthropology Rozanne M. Brooks delivered the address “Women’s Place is in the Wrong” to SUNY Cortland’s most outstanding students. Now, more than half a century later, Brooks’ message about the struggle for equal treatment facing women in academia and other pursuits still resonates among women of all ages.

Brooks, a sociologist and SUNY Distinguished Professor whose campus legacy includes The Brooks Museum and the Brooks Lecture Series, seems to have predicted the current rejuvenated women’s empowerment movement when she read her speech at the sixth annual Honors Convocation 57 years ago.

On Tuesday, Nov. 13, the campus community can hear the prophetic words of this noted Cortland scholar when local actress Barbara Jo Williams reads Brooks’ speech live in Old Main Brown Auditorium. Williams, a friend and admirer of Brooks, will revisit this historic address as the College continues its year-long series of Sesquicentennial Celebration events.

The reading takes place at 7 p.m. Karla Alwes, a SUNY Distinguished Teaching Professor of English at SUNY Cortland, will introduce the reading and discuss Brooks’ importance to the College. The event is free and open to the public.

The speech was rediscovered recently by a former student and close friend of Brooks, Howard Lindh ’73, M ’94, adjunct lecturer emeritus of performing arts at SUNY Cortland. Lindh came to Cortland in 1969 to become an art major and English minor, long after Brooks delivered this lecture. He retired from SUNY Cortland in 2016 after being a Performing Arts Department lecturer and production scenic designer. Lindh now teaches English part-time for the College.

“I inherited a number of her papers and resources and I came across a printed copy of her speech as I was looking for items of the history of the College and was getting together material for the sesquicentennial,” Lindh said. “I read it and thought, ‘For 1961, for a woman scholar and for Cortland College, Rozanne was on the cutting edge addressing the larger academic world.’

“What struck me was that her comments in 1961 had direct bearing on 2018,” Lindh said. “Much has changed and much hasn’t. A woman in the academic world at that time was an important thing, and she was very articulate. And she never shied away from being outspoken about things that concerned her students and the Collage.”

In her speech, Brooks made the point that, although American culture and language of the early 1960s consigned women to the home, American females in ever larger numbers were actually moving into the workplace. She quoted the general semanticist Alfred Korzybski’s theory that “human beings bog down in their attempts to cope with life’s problems because linguistic categories fail to accurately describe the reality they are meant to represent.” She endorsed writer and humorist James Thurber’s updating of the cliché, “A woman’s place is in the home,” to “a woman’s place is in the wrong,” because women so labeled would enjoy a vastly expanded horizon of possibilities.

Lindh recommended a re-reading of the lecture during the SUNY Cortland Sesquicentennial and suggested that Williams, a former student at SUNY Cortland, publicly present the address. Williams, who will co-direct the Homer Center for The Arts’ production of “The Lion In Winter” Nov. 1 and 2, has occasionally acted in the cast of SUNY Cortland Performing Arts Department productions.

“I’m not going to play Rozanne,” Williams said. “She was 37 at the time and I am not. I’m just going to present it in a way that she would approve. That will be easy to do, especially with such a good script.”

“She knew Rozanne’s way of speaking and way of timing a joke,” Lindh said of Williams. “There were moments I could hear Rozanne speaking in my head, she was so very effective in her tone.”

Williams sees many parallels between Brooks’ observations and the current political and intellectual climate.

“Rozanne was always a force to be reckoned with,” said Williams, who met Brooks through Lindh. “She had an outsized personality. She was very dynamic and always provided a learning experience.

“She was always very open and welcoming to young people,” Williams continued. “Her home was always delightful and interesting and the people she gathered around her were the same.”

Brooks, among SUNY Cortland’s most influential women faculty members, chaired the Sociology and Anthropology Department for many years. She initiated and supported many aesthetic and academic projects on campus, including the dragon statue in Memorial Library, the Brooks Bowl for scholarship and the silver medallion the College president wears at Commencement. The medallion was designed by the late SUNY Cortland Professor of Art and Art History Gerald DiGiusto and crafted by Linda Stewart, depicting the seven valleys of Cortland County.

A SUNY Cortland faculty member for 36 years, Brooks died in 1997.

In her estate, Brooks endowed the College’s Brooks Museum and filled it with her extensive collection of textiles and cultural artifacts representing her lifetime of world travels. Another gift to the College supported the Rozanne Brooks Lecture Series of themed, year-round multidisciplinary guest presentations. Her legacy with the College also includes the Brooks Dedicated Teaching Award, which since 1998 has honored annually a faculty member who devotes a significant amount of time both to teaching and to working with students outside of class. The award includes a $5,000 honorarium to enhance the recipient’s teaching initiatives.