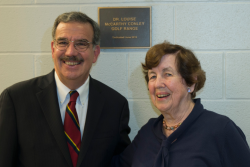 
Louise M. Conley, chair of the Cortland College Foundation and one of the College’s most actively engaged supporters, received SUNY Cortland’s Presidential Champion of Excellence Award during the College’s Undergraduate Commencement ceremonies on May 14.

Conley, a licensed psychologist from Princeton, N.J., and the granddaughter of Francis J. Cheney, the second principal of the Cortland Normal School, is only the second person to ever receive the medal.

The award is given at the discretion of President Erik J. Bitterbaum to recognize individuals who have made significant contributions to the pursuit of excellence at SUNY Cortland. The medal, which expresses the College’s admiration and appreciation for extraordinary service and leadership, was first given to Brian G. Murphy ’83, the former chair of the foundation, in 2012.

Conley’s contributions have been transformative for SUNY Cortland. They include the College’s first endowed chair, an annual education conference, a scholarship fund, a golf simulator and support for the Lynne Parks ’68 SUNY Cortland Alumni House, to name just a few.

Perhaps even more important to the College than her philanthropy is the active leadership role she has played. Conley will step down as chair in July after leading the foundation board for four years.

The roots of Conley’s commitment to the College run deep. Not only did her grandfather serve as Cortland Normal School’s second principal from 1891 to 1912, but both her mother, Clara Cheney ’17, and her father, Rollin McCarthy ’16, both graduated from the school. Her parents and both sets of grandparents are buried in Cortland cemetery next to the College.

Conley grew up hearing stories about Cortland Normal School, but didn’t set foot on the SUNY Cortland campus until the 1990s when she attended the reopening celebration for Old Main. The enthusiasm she felt among students, faculty and staff inspired her to donate her time, expertise and financial support to the College.

“Louise helped set the bar for others to follow,” Bitterbaum explained. “She is self-effacing, humble and passionate about this institution.”