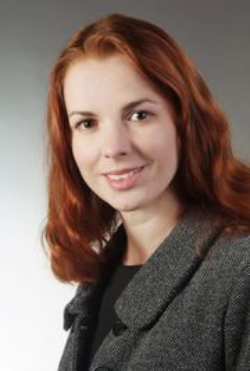 
SUNY Cortland will host a talk by a European scholar that looks at democracy abroad since the fall of communism — especially in former Soviet Union republics like Ukraine — on Tuesday, March 4.

Vera Axyonova, a political science fellow from Fulda University in Germany, will speak on the process of democratization in Central and Eastern Europe and in Central Asia at 4:30 p.m. in Moffett Center, Room 2125. Her talk is free and open to the public.

“This obviously is the appropriate time to have a discussion about the topic,” said SUNY Cortland Distinguished Service Professor Henry Steck, referring to the ongoing political uprising in the Ukraine and Russia’s recent military intervention. “The transition to democracy often can be difficult.”

Axyonova’s talk, “The European Union and Democratization: 25 Years On,” will focus on the fall of communism and its effects on countries in Central and Eastern Europe as well as Central Asia since 1989. She will offer a European’s perspective on several groundbreaking historical developments, including the dissolution of the Soviet Union in the early 1990s, the 2004 Orange Revolution in the Ukraine and the current tensions there.

Just last week, anti-government demonstrations in the Ukraine intensified to a point where former President Viktor Yanukovych was ousted, following street protests that killed dozens and wounded hundreds more. Protestors in western Ukraine generally support stronger relations with the European Union while the country’s eastern population generally supports greater ties with Russia. On Monday, Russia’s military entered Crimea, a strategically important peninsula in eastern Ukraine, with the apparent support of the population there.

Axyonova serves as a political science fellow in the Department of Social and Cultural Sciences and a researcher for the Centre for Intercultural and European Studies at Fulda University of Applied Sciences, a German institution with strong study abroad exchange ties to SUNY Cortland.

Political changes in the region were the subject of Axyonova’s doctoral work and serve as a primary focus for her research. A specialist on politics in Central Asia, she has authored two books: Insights into Development: Meeting Civil Society’s Needs in Kazakhstan (2011) and European Engagement Under Review: Promoting European Values and Practices in the Post-Soviet Space, which will be published later this year.

Axyonova studied international relations at East Kazakhstan State University before completing a master’s in intercultural communication and European studies from Fulda University. She earned her Ph.D. in political science from the University of Bremen in Germany in 2013.

Sponsors for Axyonova’s talk include: the Clark Center for International Education; the College’s international studies and political science departments; Campus Artist and Lecture Series; the Project on Eastern and Central Europe; the Asian and Middle Eastern Studies Committee; the Center for Gender and Intercultural Studies; and the Political Science Student Association.