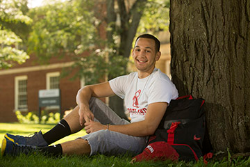 
Fernando de la Cruz remembers what it felt like to sleep on cold, hardwood floors. For the first 10 years of his life, the SUNY Cortland first-year student and his mother Rosa lived homeless. They shuttled between her friends’ cramped New York City apartments. Some mornings, Fernando dressed for school in a McDonald’s bathroom.

Rosa, a single parent from the Dominican Republic, told Fernando at a young age that education would be his equalizer. Without a home computer, he spent hours in the library. He started to shadow medical doctors in middle school. And after they eventually settled in Manhattan’s economically troubled Washington Heights neighborhood, Fernando spread his mother’s message through his own actions, by tutoring and coaching younger children.

By the time he was awarded his high school diploma from City College Academy of the Arts this past spring, de la Cruz already had earned more than 60 college credits — essentially completing two years’ worth of college coursework before his 18th birthday.

A week after he started his freshman year at SUNY Cortland, de la Cruz learned of his most impressive accomplishment to date. He earned the State University of New York’s first-ever Carey Gabay Memorial Scholarship, a full-ride award that covers all costs of attendance for five students in the 64-campus system.

Gabay, a top legal aide in Gov. Andrew Cuomo’s administration, was killed by a stray bullet when he was caught as a bystander between two rival street gangs during a shootout in September 2015. The award in his memory recognizes economically disadvantaged students like de la Cruz who pair their social justice, leadership and mentoring abilities with academic excellence.

“Whatever it is — my schoolwork, my community or even sports that I play — I just always try to do better for myself and for the people around me,” said de la Cruz, who suffered a concussion in May after local gang members wielding bats and knives assaulted innocent students at his high school.

The similarities run deep between de la Cruz, an exercise science major who aspires to be a physical therapist, and Gabay, a Harvard-educated public servant who grew up in the Bronx.

In middle school, de la Cruz was one of 14 students — out of more than 1,000 applicants — selected for a competitive, six-year medical program at NewYork-Presbyterian Hospital. Later on, as a senior in high school, de la Cruz secured an internship in the office of Rep. Charles Rangel, where he consulted directly on topics such as immigration and low-income housing. 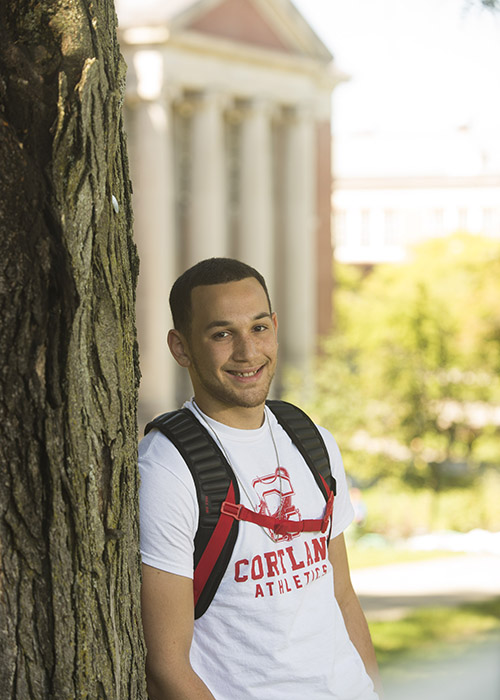 “I am my own father figure, the one who worked late nights packing bags at my local supermarket just so my mother and I could eat,” de la Cruz wrote in his scholarship essay. “I am the big brother, the uncle, the father that many kids in my community dream of having.”

“There are kids younger than me who go through things that are way worse than anything I witnessed,” de la Cruz said. “I want them to choose a different path because they saw me.”

In the classroom, de la Cruz’s high school grades routinely ranked among the best in his class. He was accepted into several undergraduate pre-physical therapy programs, but he said that his college search process became clearer after a presentation at his high school. That’s when de la Cruz met Kharmen Wingard and Michael Johnson, staff members in SUNY Cortland’s Admissions Office.

“Kharmen was like a dad to me, I kid you not,” de la Cruz said. “The day he came to our open house in the city, I fell in love with Cortland. I knew it had everything that I wanted.”

The same energy that lifted de la Cruz through difficult times as a child still carries him today. He shares a room in Bishop Hall with his best friend from childhood, Esteban Arias. He’s only lived in Cortland for a month, but de la Cruz already has joined Men of Value and Excellence (M.O.V.E.), the Caribbean Student Association and a flag football intramurals team. His next goal is to earn a spot on the varsity basketball team.

“When I first came to Cortland, I could tell it was an atmosphere where people enjoy challenging themselves,” he said. “The one thing I knew about Cortland is that everybody is on the verge of doing what they want to do.”

His mother initially worried about her only son attending a college three and a half hours from their Washington Heights apartment. But they took the once-in-a-lifetime scholarship as an affirmation of his decision.

He checks in with his mother every couple of days with a phone call or a text message. Rosa, who exclusively speaks Spanish, will deliver a constant reminder.

“Basically, it means to always place your 100-percent effort in all that that you do,” Fernando said. “She taught me that you can always work hard and have faith, even when you don’t have much else to give.”