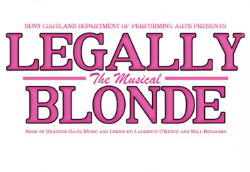 
“Wanted, one canine” was the unusual casting call that went out recently from SUNY Cortland’s Performing Arts Department as it prepares “Legally Blonde, The Musical” for six main stage performances starting Friday, April 10.

“No previous stage experience necessary,” the electronic message to faculty and staff relayed.

“Dog must be friendly and good with people and toy or miniature size-Chihuahua, or similar size/type — no more than 10 pounds or so — able to be carried in a bag/large purse.”

Associate Professor of Performing Arts Kevin T. Halpin is directing this musical takeoff on the 2001 hit Warner Bros. film of the same name starring Reese Witherspoon and on the novel Legally Blonde by Amanda Brown. He is confident he’ll soon cast his canine actor for the role of Bruiser, having already lined up the doggie character’s slightly larger, four-legged love-interest, Rufus.

“I’m looking at a couple dogs tomorrow so hopefully I will have one by then,” Halpin said.

Meanwhile the rest of the cast — the human, student part — auditioned and was settled a month ago. So far, the rehearsals for this exciting, stylish and energetic musical production indicate the performers’ vocal and acting talents won’t be upstaged by a couple of scene-stealing pooches.

Tickets for the first time may be purchased in advance online by credit card at www.cortland.edu/boxoffice and also will be sold at the Dowd Center box office one hour prior to each performance.

Ticket prices are $8 for all students and children, $15 for SUNY Cortland faculty, staff and senior citizens and $18 for general admission. All lead and feature parts are played by musical theatre majors while a few ensemble cast members are enrolled in other disciplines.

All lead and feature parts are played by musical theatre majors while a few ensemble cast members are enrolled in other disciplines.

Jaclyn “Jackie” Collins, a senior from Bayville, N.Y., plays the lead character of Elle, the UCLA Malibu sorority girl headed off to Harvard Law and going after what she wants — love!

Benjamin Shimkus, a junior from Saratoga Springs, N.Y., portrays Elle’s former boyfriend Warner Huntington III, who thought he had left Elle behind in Malibu, having wanted her to become more “serious.” “Ward, he doesn’t change very much, he plays a jerk in the musical as well,” Halpin said. “He also has a very, very strong singing voice. He has been a very thoughtful, grounded actor, taking on the character and really living it. He’s understated, which works well for Warner.”

Andrew Cuccaro, a sophomore from Baldwinsville, N.Y., is cast as Emmett Forrest, Elle’s new love interest, a recent graduate of Harvard law who’s working as an associate of Callaghan the lawyer. “You don’t see Emmett’s character develop in the movie as much as you do in the musical,” which pushes Emmett into a leading role, Halpin said.

Rounding out the leading roles is Paulette, portrayed by Allison “Allie” Tamburello, a senior from Lindenhurst, N.Y.

As Ward’s preppy new girlfriend Vivienne, senior Berkowitz moves beyond her past ensemble performances at SUNY Cortland to take on a key role.

“She portrays an incredibly strong and sharp character on stage,” Halpin said. “The role requires an amazing high belt in her voice. She’s a very somber and dark kind of character for most of the play, but in the pivotal part, she really blows the theatre out.”