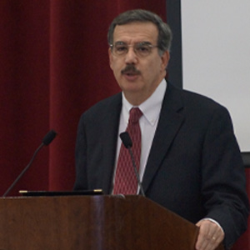 In front of a large crowd in the Corey Union Function Room, the president spoke about six major topics during his 50-minute talk: high-impact learning; SUNY Cortland’s budget; its admissions outlook; the College’s continued response to the 2013 Cortaca Jug celebration; big-picture SUNY and state initiatives; and fall semester highlights, which he dubbed “points of pride.”

President Bitterbaum led off his talk by explaining the importance of high-impact practices that are often attributed to student success. These include experiences such as volunteering, participating in hands-on undergraduate research and studying abroad. He praised the work of the College’s Institute for Civic Engagement and listed several documented benefits that come with high-impact work — immediate gains such as higher grade point averages and higher student retention rates along with long-term payoffs that include problem-solving skills and a more loyal alumni base.

“We’re not just training (students) for their first job,” Bitterbaum said. “It turns out these practices have a tremendous impact on who they become as people.”

While detailing the emotional and spiritual benefits students often discover through service learning, he repeated a thoughtful line once shared with him by a student.

“Service is the rent we pay for being human,” Bitterbaum said.

That message of optimism and encouragement gave way to a brief discussion of the College’s budget, which continues to be influenced by factors such as enrollment, stock market performance and statewide mandates. The president was honest in his overview of the national conversations being shared about higher education, mentioning concerns such as student indebtedness and financial instability at some institutions.

“The message here is that even though it looks like we’re coming out of the great recession, in New York, it’s still a very tight budget and we have to be cautious with what we do,” Bitterbaum said.

Undergraduate admissions efforts will be especially crucial over the next several years as the number of graduating high school students in the Northeast continues to level off, he said. Still, an image in the president’s slideshow revealed SUNY’s price tag for full-time tuition and fees in 2014 compares very favorably to other public systems and some private institutions within New York state.

“Obviously, we have a really great product,” he said.

An update of the College’s response to the 2013 Cortaca Jug celebration mentioned that the 19-member joint commission made up of College officials and community residents has met three times so far, with eight public meetings scheduled.

“We have really great people who are doing this and we will find solutions,” Bitterbaum said.

His response to statewide and system-wide initiatives such as Open SUNY, which seeks to maximize online learning opportunities, suggested much of the same.

“We ourselves are very creative with what we’re doing,” the president said, mentioning the College’s Collaborative Online International Learning (COIL) plans as well as its hybrid programs that involve both a classroom and online component.

Many highlights from recent months punctuated the president’s address, especially unique programs that take place away from the SUNY Cortland campus. They included the College’s work at the Belize Zoo; a new student teaching experience in Thailand; and projects that brought groups to the Outdoor Education Center at Raquette Lake, such as the Adirondack Trail Blazers program for first-year students and the grant-funded “Forever Wild: The Adirondacks in the Gilded Age and Progressive Era” program for teachers.

Additionally, President Bitterbaum called attention to good news from campus — an increase in the number of study abroad participants, a move to completely renewable electrical energy, and the publication of the Wagadu and NeoVox online journals — as well as a handful of notable grant awards received by faculty members in recent months:

• Anderson collaborated with Vicki Wilkins, a professor of recreation, parks and leisure studies, for a $230,000 award from the New York State Developmental Disabilities Planning Council;

• Andrea Lachance, the dean of the College’s School of Education, and Dennis Farnsworth, a coordinator for teacher education, earned $40,000 from the SUNY Teacher and Leader Education Network;

• Lachance; Valerie Behr, a lecturer of childhood/early childhood education; and Richard Kendrick, the director of the College’s Institute for Civic Engagement and a professor of sociology/anthropology, teamed up on a $10,000 Bringing Theory to Practice award;

• Gregory Phelan, an associate professor of chemistry, and Kerri Freese, the College’s Noyce Program coordinator, were awarded $715,398 from the National Science Foundation (NSF) for the Robert Noyce Teacher Scholarship Conference;

During his final remarks to faculty and staff members, the president reflected on a common theme that came up in the stories he shared with alumni during the College’s “Educating Champions, the Campaign for Cortland” fundraising effort.

“During the five-year campaign, it came up over and over again,” Bitterbaum said. “Who do they remember most? It’s the faculty and staff.”