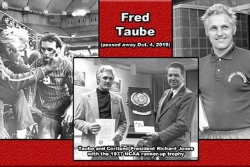 Taube (pronounced TAW-bee) was a men's soccer assistant coach for three seasons under T. Fred "Prof" Holloway and also was an assistant track coach at Cortland before taking over in 1973 as just the second men's soccer head coach in school history. The program's all-time wins leader at Cortland, his teams posted a combined 247-88-36 record and made 11 NCAA Division III tournament appearances over 22 seasons. The Red Dragons were national runner-up in 1977, placed third in 1978, tied for third in 1982 and tied for fifth in 1976, 1979, 1981, 19990 and 1991. They also made three Eastern College Athletic Conference (ECAC) playoff appearances, winning titles in 1973 and 1974.

Cortland won seven State University of New York Athletic Conference (SUNYAC) titles during Taube's tenure. He was voted as the SUNYAC Men's Soccer Coach of the Year eight times – the most of any coach in league history since the award originated in 1968. Taube also was named New York State Coach of the Year by the National Soccer Coaches Association of America (NSCAA) on four occasions.

A Brockport native, Taube earned a bachelor's degree from SUNY Brockport in 1959 and was an all-state soccer player for the Golden Eagles. He received a master's degree from the University of North Carolina and a Ph.D. from the University of Utah. Taube taught and coached at Auburn University in Alabama from 1960-63 and taught and coached soccer and track for seven years at MacMurray College in Jacksonville, Ill., before coming to Cortland.

Taube was a long-time NSCAA member and served as the organization's president in the mid-1970s. For years, he coordinated Cortland's Physical Education Department's summer courses at the College's Outdoor Education Center at Raquette Lake, N.Y.

Taube retired on May 19, 1995, and was designated Professor of Physical Education Emeritus. He and his wife, Joan, were residing in Clearwater, Fla., at the time of his passing.

"The biggest things I remember about (Fred) are how easy going he is and what a good time we always had in practice," said former Red Dragon Frank Ciliberto '83 right before Taube's retirement. "Everybody's out there to have a good time, and that's what Fred was all about on the soccer field. You had players who just wanted to play for him, and that's why I think he had good teams."

Ciliberto was inducted into the C-Club Hall of Fame last month and is one of five former Taube players in the Hall along with Donald Ridall '75, Perry Nizzi '77, David Wright '82 and Michael Borra '93.

"I've always been very fortunate in my athletic career to have great coaches. I can honestly say Fred was the greatest of all of them," Wright said when Taube retired. "I think the reason for that was because when he looked you in the eye and gave you that laugh and that smile, he let you know individually that he cared about you."