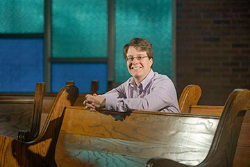 
Rachel Ditch ’11 is not afraid of hard work.

That is, as long as it helps construct a Habitat for Humanity home for a disadvantaged family while it encourages young collegians in fellowship, community service and spiritual growth.

Ditch, who since June 2016 has directed Christian Education at Homer Congregational Church, United Church of Christ, on Jan. 23 undertook the additional responsibilities as interim Protestant campus minister at SUNY Cortland.

“Ultimately, I want to be a person who journeys with everyone in this campus community,” Ditch said. “Some are people of faith, some of us aren’t and that doesn’t mean that we are so divided we can’t work together and get along. We have students who for some it will be the first time they have lived outside of their parents’ or guardians’ home. They are defining who they are as people in this world.”

Until recently, she also served as the caretaker of the College’s Interfaith Center, located just off the campus at the corner of Prospect Terrace and Graham Avenue.

“While Rachel was here she participated in our campus ministry,” said Ditch’s mentor, Johnson, the Protestant campus minister since 2008. “And now, after doing great work in other places, she is returning to head up this Protestant Campus Ministry.”

Johnson started Feb. 1 as pastor of the Homer Congregational Church. The first female settled pastor at the church, Johnson also has served more than eight years as executive director of the Cortland County Council of Churches. The council has supplied the College with a Protestant campus minister since the 1930s, according to Johnson.

“I have been honored to work here and to be a spiritual mentor for our campus family,” Johnson said. “I will miss the work, but I leave knowing without a doubt, everyone is in good hands. I couldn’t be more proud!”

While setting aside her caretaker duties and moving to Virgil, N.Y., Ditch will continue her duties with Homer Congregational Church, working closely with Johnson. On March 26, she will be ordained as a minister.

Ditch earned an associate’s degree in liberal arts and sciences at SUNY Broome in 2008 and a bachelor’s degree in adolescence education: English from SUNY Cortland in 2011. While at SUNY Cortland, she attended local church worship services and joined in the Cortland County CROP Walk and the Community Thanksgiving Services and Epiphany Choir Festival.

Her educational background has prepared her for many teaching roles both in her church and on the campus. In her Homer Congregational Church role, Ditch among many duties is responsible for religious education and fellowship opportunities for children and youth.

Ditch received a Master of Divinity from the Boston University School of Theology. She has a certificate from the school in religion and conflict transformation.

A member of Homer Congregational Church since 2010, Ditch served one year on its Stewardship Committee and one year on its Deacon’s Committee. In 2011, she became a member in discernment of the Susquehanna Association of the New York Conference of the United Church of Christ.

“I knew I wanted to go to seminary but I didn’t know where I wanted to go and so I decided to take a gap wilderness year to discern where God was calling me for my education,” Ditch said.

She served from July 2011 to June 2012 as a youth involvement and faith relations coordinator with AmeriCorps VISTA partnership with Habitat for Humanity of Tompkins and Cortland Counties. She coordinated opportunities for faith groups and younger groups to participate in the Habitat for Humanity mission.

“I helped bring Habitat’s message and mission to area churches,” she said.

Ditch also worked to find age suitable and safe roles for younger participants from local congregations in the volunteer home construction projects, including the dwelling that was ultimately built on Clinton Avenue Extension.

Later, as an AmeriCorps VISTA leader through New York Campus Compact, Ditch oversaw a team of VISTAs across the state, coordinated trainings, and revised oversight and application parameters the for program.

Ditch might be viewed as following in the footsteps of Don Wilcox, who was the College’s Protestant campus minister for 22 years until 2008. Wilcox fostered the campus chapter of Habitat for Humanity in 2001 and for many years led dozens of eager young students on College-sponsored spring break road trips to build new houses in poor communities of North Carolina and Virginia.

Since graduating from the College, Ditch also has served as a pastoral care intern for clinical pastoral education at Sherrill House Nursing Home and Rehabilitation Facility, Jamaica Plain, Mass.; as a student minister at the First Congregational Church of Reading, United Church of Christ, in Reading, Mass.; and as a volunteer at East Side Congregational Church, United Church of Christ, in Binghamton, N.Y.

Ditch wasn’t raised in a church tradition, but discovered it after arriving at SUNY Cortland as a young woman from a small Southern Tier town who felt a little lost in the larger campus community.

“She knew my grandparents and they asked her to check on how I was doing,” Ditch said. “First we met at the Hollywood Diner and talked for three hours. Then she told me, ‘We have this great Thursday night supper and it’s not religious at all, and I think you would enjoy it.’ Then she said ‘There’s an event going on at Grace and Holy Spirit Church, and I really think your voice could lend some perspective to this.’ She rolled the invitations out in a way that was a very organic growing from within.”

“I’m thrilled to be returning to the community that gave me so much,” she said. “I’m eager to walk in life with you.”