Events to Focus on Workers and Jobs 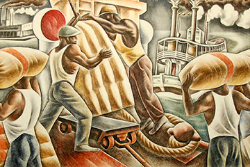 
SUNY Cortland will hold an exhibition of Works Progress Administration artworks from the New Deal era and present talks on the themes of labor and work from Friday, Feb. 24 to Friday, March 3.

The series of events, titled “Re-Imagining Work, Prosperity, and Art: Reflections on the New Deal and Envisioning 21st Century Possibilities for Employment,” looks to help students establish relationships that will foster new lines of employment and graduate education opportunities.

“These talks and the art exhibition are designed to stimulate a vision for the future,” said Benjamin Wilson, assistant professor of political economy at SUNY Cortland, who organized the week’s events on behalf of the College’s Cultural and Intellectual Climate Committee (CICC).

“This will expose our students to a wide variety of opportunities for the creation of career paths,” Wilson said. “We want our students to explore professional employment possibilities that not only support individual livelihoods but look to make the world a healthier place.”

The events continue the CICC’s yearlong series “Art and Everything,” which focuses on the essential nature of art and imagination in society. The events examine the power and purpose of art across the disciplines.

The WPA exhibition, comprised of works on loan from Syracuse University Galleries, will take place in the Old Main Colloquium Room. The show opens Friday, Feb. 24, and runs until Friday, March 3. Gallery hours are 10 a.m. to 4 p.m. weekdays.

A series of exhibition-related talks will take place at the exhibition location on Friday, March 3.

Scott Moranda, an associate professor of history, will explore “Reforestation, Local Communities, and the CCC in Central New York” from 12:30 p.m. to 1:30 p.m.

Domenic Iacono, director of SUArt Galleries, will discuss the WPA artwork and government employment of artists that afternoon from 2 p.m. to 3:15 p.m.

A talk series on topics such as culinary, visual, performing, media and literary arts will be held in Brockway Hall Jacobus Lounge on Wednesday, March 1 and Thursday, March 2.

On Wednesday, Howard Lindh, scenic designer with the College’s Performing Arts Department, will present “Pinocchio to Hamlet: Puppetry and the WPA,” from 12:30 p.m. to 1:30 p.m.

From 4 p.m. to 5:15 p.m., Mitchell Davis, vice president of the James Beard Foundation and Wilson will offer “Chefs and Political Advocacy, Food Systems Innovation and Value.” They will address the changes that are occurring in our food systems and the professional opportunities that are becoming available as a result.

From 5:30 p.m. to 6:45 p.m., two professors will lecture on “The Federal Theatre Company and Modern Media Promoting Social Change and Creative Production.” The presenters are Scott Ferguson, assistant professor of film and media studies in the Humanities and Cultural Studies Department at the University of South Florida, and Angela Branneman, associate professor of theatre arts management at Ithaca College.

On Thursday, Susan Demasi, professor and librarian at Suffolk County Community College, will discuss her book, “The Man Who Wrote America: Henry Alsberg and the Continuing Legacy of the WPA’s Federal Writers’ Project.” Her hour-long talk will begin at 12:30 p.m. Alsberg directed the Federal Writers’ Project, a New Deal program of the Works Progress Administration, under which he orchestrated the hiring of thousands of unemployed writers. The project produced more than 1,000 publications from 1935 to 1939, including the still highly acclaimed American Guide series. Demasi has had her work featured in The New York Times and is a previous grand prize winner of Showtime's Nantucket Film Festival.

John Henry, a senior scholar at the Levy Economics Institute of Bard College, will present “Reflections on the New Deal: The Vested Interest, Limits to Reform, and the Meaning of Liberal Democracy.” His talk runs from 4 p.m. to 5:15 p.m. on Thursday. Henry authored John Bates Clark (Macmillan, 1995) and The Making of Neoclassical Economics (Unwin Hyman, 1990; repr., Routledge, 2011). Henry has also contributed to 10 volumes of collected essays and has published more than 50 articles and book reviews in academic journals.

“We are all looking forward to thoughtful discussion and debate about cultivating and supporting opportunities for meaningful and productive careers in the creative arts for our students and beyond,” Wilson said.

In addition to the CICC, the “Art is Everything” events are sponsored by the President’s Fund, the Surette Fund, Dowd Gallery, the Binzagr Institute for Sustainable Prosperity, Memorial Library, grants from the Campus Artist and Lecture Series Committee and the departments of economics, art and art history, and history.

For more information on the week’s events, contact Wilson.

The exhibition will include "Howard Cook Mississippi Stevadores 1935," shown above, and "Ida Abel man We Have a Claim! circa 1938," shown above left, both artworks courtesy of Syracuse University Art Collection.