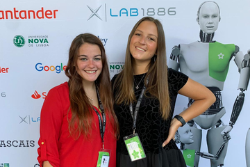 
Alex Contento and Dominique Pace had an eventful summer break in Portugal.

They visited the beach, sure. And the two SUNY Cortland students played rugby with the team from Lisbon’s Instituto Superior Técnico (Higher Technical Institute).

But the focus of their month-long study abroad trip was to participate in the European Innovation Academy, based in Cascais, Portugal. Think of it as a sort of international college student and young entrepreneur “Shark Tank,” that allowed them to rub elbows with some of the brightest entrepreneurial minds in the world.

Contento, a senior from Homer, N.Y., and Pace, a junior from Cortland, N.Y., are both business economics majors. They became interested in this opportunity after taking an entrepreneurship class taught by Brian Ward during the spring semester.

The European Innovation Academy’s programming is aimed at college students and entrepreneurs who want to learn more about all aspects of starting a new business, from the economic side to marketing and public relations and software development.

SUNY Cortland sponsors a summer study abroad program to the European Innovation Academy as a six-credit course. The university is also exploring options to expand to the academy's North American academy in Calgary, Alberta, Canada.

More than 500 people attended this year’s event and they were broken into teams of five members each. Those five members were given roles as chief executive officer, chief business officer, chief marketing officer, chief technology officer and chief design officer. From there, they were tasked with creating a fictional business from scratch and developing all of the steps it would take to make that a reality.

Major speakers, including Portugal President Marcelo Rebelo de Sousa, visited each day. Key figures in technology and business from organizations that included Google, Microsoft and Adobe also served as mentors and coaches to help inspire the teams and guide them as they worked on building their ideas.

Contento teamed up with another student from the U.S., two people from Portugal and one from Estonia. The group’s proposed startup would use artificial intelligence to help high school students find a career path that is right for them.

Pace worked with partners from Cyprus, Iran and the U.S. to develop technology that will increase the efficiency of recycling.

Contento served as her team’s business officer and Pace was the marketing officer. The skills they developed on campus helped prepare them for their intense learning experience at the European Innovation Academy.

“Income statements and things like that, if we didn’t take that in class, we wouldn’t have known how to do it,” Contento said. “A number of people in my group didn’t know things like that. One was a medical student and he had no background in any type of business. It was easier for me to explain that and things like market canvas after having taken accounting and entrepreneurship and finance and marketing. All of that definitely helped.”

“It moved so much faster. It was only 15 days as compared to the whole spring semester,” Pace said, comparing it to her Cortland entrepreneurship class, in which students also developed and pitched a business. “We’d go in every day at 10 in the morning and listen to keynotes for a few hours and then got lunch break. From 1 p.m. to about 8 o’clock at night we were with our groups, working. We had mentors for every different sector of it and we had a lot of different opinions on ways we could go.”

A select number of teams were chosen to pitch their concept to investors on the final day of the program, similar to the popular television show “Shark Tank.”

There were a few breaks that allowed Contento and Pace — neither of whom had studied abroad before — to soak up Portugal’s culture. Their rugby experience was part of a teambuilding workshop at Instituto Superior Técnico, a public school of engineering and technology that is part of the 47,000-student University of Lisbon system.

Contento and Pace hope more SUNY Cortland students take advantage of the European Innovation Academy in the future and not just those who are students in the Economics Department. Many students in STEM fields may also benefit from a chance to learn in such a well-rounded fashion.

“A startup definitely takes a lot of work,” Pace said. “It was a good experience to show what it actually takes. There is so much work and effort and money you need to put into it.”

For more information on the European Innovation Academy, visit the International Programs Office online or contact Kathleen Burke, professor and chair of the Economics Department, at 607-753-2434.