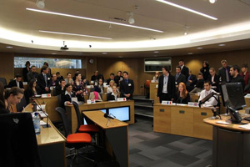 
A handful of SUNY Cortland political science students spent part of their winter break in Exeter, United Kingdom, debating vehemently over the uncertain fate of the European Union.

The College’s four-member contingent portrayed Polish Prime Minister Donald Tusk, Polish Foreign Minister Radek Sikorski, and other real-life dignitaries from Poland or the Netherlands during simulated meetings with students from around the world on the University at Exeter campus Jan. 5 to 7.

Welcome to the world of SUNY Model European Union (SUNYMEU), a 25-year-old SUNY political science experiment that lets college students from the U.S. and other countries meet and attempt to solve the problems the real European Union has experienced as member countries work toward integrating markets and enabling cross-border commerce.

“You could read about it in textbooks and watch it on TV, spend hours and hours of studying this type of thing,” said SUNY Cortland participant, John Amaruso, a junior political science major from Merrick, N.Y. “But, you really don’t understand until you’re sitting down and taking part in it, until you’re inside the process. It’s a completely different experience.”

For three days, the teams locked horns with 150 other students from the United States and abroad who also had assumed the roles of other genuine European movers and shakers.

“I consider myself somebody who is knowledgeable on politics and organizations and that kind of stuff,” said Amaruso, who portrayed the Polish foreign minister and negotiated policy on the creation of a European Union task force to deal with its economic crisis and a policy statement for the treatment of Hamas in the Palestinian territories.

You don’t really know until you’re sitting down and have to verbalize it, you know?” Amaruso said. “It took me back a bit to see how well these kids were prepared for this conference. It was really cool. It definitely put into perspective where I stand in my level of educational attainment. It was intimidating, but it was just as exciting as it was scary.”

The simulated Poles negotiated not only for or against the salvation of certain failing Eurozone economies, but for specific policies related to the Middle East, the illegal drug trafficking that spreading in member countries, and for attempts to reduce member countries’ dependence upon nuclear energy in the wake of Japan’s Fukushima Daiichi disaster.

Originally called the SUNY Model European Community, the classroom experiment — which jumps from a different European country to America every other year — SUNYMEU was renamed in the mid-1990s following the ratification in 1993 of the Maastricht Treaty, the foundational document of the E.U.

SUNYMEU was the first university-level European Union simulation in the United States. As a founding member, SUNY Cortland’s students have participated in SUNYMEU from the time when today’s wobbly European Union was nothing more than a gleam in a bureaucrat’s eye.

Presently, the multi-SUNY campus undertaking is based at Buffalo State, sponsored by SUNY’s Institute of EU Studies and supported university-wide by the SUNY Global Affairs Office.

This year, the students simulated the meeting of heads of government gathered together in the European Council, as well as meetings of the foreign ministers, finance ministers and Committee of Permanent Representatives.

“I have learned that it’s rather difficult to represent an entire country’s point of view and I felt on my shoulders the great responsibility of decision making, which is a great but not a comfortable feeling,” observed Andreea Denisa Radu, who portrayed Poland’s Tusk for SUNY Cortland after studying here last semester under an exchange program with University of Babes-Bolyai in Cluj, Romania.

Although it is probably in Poland’s best interest to retain member countries whose staggering debt now threatens the integrity of the whole union, and Radu had prepared Donald Tusk’s argument carefully, she learned the heat of the discussion sometimes carries the day.

“I had to follow closely the official position of Poland’s leaders regarding these issues, as stated in the 2012 Polish foreign policy statement,” relating to the Eurozone and its relationship with members that opt out of using the Euro, the common currency, Radu said.

So as Tusk, Radu had planned to suggest the creation of an emergency EU and Eurozone membership crisis forum to find constructive solutions to the EU financial crisis. A second recommendation was the possible revision of the Maastrict Treaty regarding keeping national currencies for some countries with special status.

“I was prepared mainly for the topics on the agenda, but … we ended up talking about political and financial sanctions to be imposed to member states that didn’t follow Maastrict criteria,” Radu observed.

“Some of the delegates supported even kicking them out of the EU or offering them the opportunity to opt-out. I disagreed with these statements and supported a stronger European cohesion even in times of crisis. I rallied around states such as Germany, France, Sweden or Spain and we had intense discussion during breaks against the opt-out clause.

“I was feeling like things were happening too fast and my reaction time was left behind.”

In the rush of voting, she accepted the reformulation of her first position and the indefinite tabling of the second. She said a lot was learned from the experience.

“I formed an impression about how different is the way Americans perceive the European political system than the way Europeans do,” Radu said.

The experience has made a pragmatist of Amaruso. The body failed after eight hours to approve any task force to save struggling European Union countries but captured the necessary votes of two previously hard-line opponents to the incorporation of Hamas into Palestine’s political future.

“If we didn’t have unanimity, we risked coming to the end of two-and-a-half days of negotiating with nothing to show for it,” Amaruso said. “We got the two who didn’t go along to agree to it just so we could vote on it.”

“I learned that throwing out a bad proposal can be just as good as creating a good one,” Amaruso said, reflecting on the overall experience.

Besides Radu and Amaruso, the SUNY Cortland contingent also included Roshell Gist, an international studies and political science dual major from Saranac, N.Y., and a second year-long exchange scholar from University of Babes-Bolyai, Elena Ceban. They were joined in Exeter by Stefana Ignea, a 2010 Romanian exchange scholar to SUNY Cortland from University of Babes-Bolyai. Two other SUNY Cortland students participated in the class but were unable to attend the simulation.

The Romanian scholars were recruited to study public administration and public policy at SUNY Cortland as Atlantis Scholars supported by the U.S. Department of Education and the Fund for the Improvement of Postsecondary Education (FIPSE) and the EU Commission in Brussels. Amaruso also is an Atlantis Scholar and on Feb. 17 heads to Romania to begin a semester of study at University of Babes-Bolyai.

“This really broadened my world view in a lot of ways, and it was really beneficial to my academic studies,” said Amaruso, who has had little prior international travel experience.

“It really showed me the way European culture is. Eastern Europe is really different than Western Europe. And afterward I spent a week in Amsterdam. It has really prepared me in a lot of ways to study for a long period in a completely different culture.”

While SUNYMEU is a course and project of the College’s Political Science Department, over the years students have participated from a number of other majors and departments, including International Studies, History, Economics, Modern Languages, and Recreation, Parks and Leisure Studies, observed the SUNY Cortland faculty adviser, Distinguished Service Professor Henry Steck, political science. The Romanian students were overseen by Natalia Cuglesan, a Jean Monnet Fellow at Babes-Bolyai.