Alumni team up for antiracist mural in Cortland 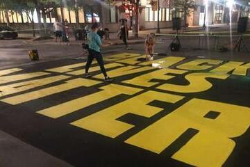 
After the murders of Breonna Taylor and George Floyd earlier this year, Black Lives Matter street murals have been painted in downtown areas around the country.

Thanks to the efforts of three SUNY Cortland alumni, Cortland now has its own mural on a major intersection that they hope will inspire further conversations about race.

Tim Bennett ’07, the owner and publisher of The Cortland Voice and founding president of FunFlicks Indoor and Outdoor Movies in Central, Northern and Western New York, heard that a Black Lives Matter mural was coming to Syracuse. So he decided to attend a virtual meeting of the City of Cortland’s Common Council and ask if it would be willing to have a similar mural installed if he paid all costs and arranged for its painting.

His proposal passed by an 8-0 vote.

“I said I’d be more than willing to fund it personally so that no one else had to worry about their tax dollars or anything because I knew not everyone would be for it. And that’s OK,” Bennett said.

Bennett first approach local artist Molly Reagan Andrejko about designing and creating the mural. Andrejko, however, was tied up working on a mural for the Cortland Youth Bureau. She suggested Bennett reach out to Crystal Lyon ’09, a Cortland native who has first-hand experience with local public art.

Lyon had painted a massive mural on the side of the Cortland Corset Building in 2018 that paid tribute to the building’s history.

She created a design to paint the words “Black Lives Matter” in yellow paint on the intersection of Main St. and Court St. in downtown Cortland, with the words facing drivers heading south on the one-way stretch of Main St.

Lyon gathered a few volunteers and used paint and brushes that had been purchased by Bennett when the mural was installed on June 29. Painting started at 8 p.m. when the city closed adjacent streets and the mural was finished by 1:30 a.m. Meanwhile, a crowd gathered to hang out, listen to music and start the important conversations the mural aimed to inspire.

“The important thing is to see it, recognize it and actively listen to people who are experiencing it and try to be better,” Lyon said.

Cortland Mayor Brian Tobin ’94 considers the mural another positive step toward tackling racism in the city. A new committee called Cortland Forward was recently formed to take actions to eliminate racism and make everyone in the community feel welcome.

While Tobin and councilmembers admitted that not all reactions to the mural would be positive, they believe its presence will serve as a welcoming message of inclusivity.

“The intention from the Common Council and myself is: one, for people who are underrepresented and whose voices haven’t been heard, it’s a way to say your voice is heard and we’re listening,” Tobin said. “Two, it continues the conversation. There’s been a conversation across our country and it’s not just the murder of George Floyd, it’s also everything that’s been happening. It’s an ongoing conversation about racism in our country. Personally, I thought this was a good way to continue that conversation.”

Tobin also underscores that the mural is in no way connected to the national Black Lives Matter organization. It was conceived entirely by locals who are hoping to engage others in the community on this topic.

“It’s not a nod to the national organization, it’s an output from a conversation from local community members and the realization from many of us that people, because of the color of their skin, are not treated to the same standard as others,” Tobin said. “It’s not anybody asking to be treated better than others, it’s about being treated equally and equitably.”

Bennett hopes that individuals have these important conversations one-on-one and make an effort to listen to one another. He wishes that the people who have hurled insults and worse at him knew he does care deeply for law enforcement. His late mother, Sherelyn Bennett, was a corrections officer for more than two decades, and he has worked directly to raise money for the local Shop with a Cop program that provides for needy families at Christmastime.

“There were a lot more positives than negatives,” Bennett said. “I have people who don’t know me who will scream things at me. I will say that many more reached out and have seen that more is being done for the community. Many can see that I’m all for doing good for the community.”

He also would like to do similar programming or activities at SUNY Cortland.

“I’ll pay for something to be done on campus,” Bennett said. “I’ll offer to financially donate something toward diversity on campus. Maybe that will encourage others to do the same.”