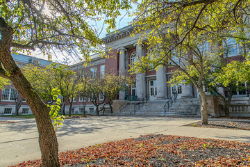 During the 2016-17 winter break, Campus Energy Manager Matthew Brubaker oversaw the installation of 136 new light-emitting diode (LED) lighting fixtures in the corridors of Old Main, the original, nearly 100-year-old building around which the current campus grew. The new LED bulbs use just 26 watts, compared to the 150 watts of the old incandescent metal halide lamps.

In just six months, that change has saved enough energy to power five residential homes for about a year.

Between January and June 2017, Old Main used 52,000 fewer kilowatt-hours than it did in the first six months of 2016, Brubaker said. Those savings have offset 20 metric tons of carbon emissions. Thanks to the energy savings and an incentive received from National Grid, the cost of the installation has already paid for itself.

“Because the corridor lights were on so much, and using an older technology [incandescent Metal Halide Lamps] we are able to realize such a huge savings,” Brubaker said. “When looking at projects like these, it comes down to how often the lights are on. That’s why it’s been such a good saver and such a good fit.”

A similar project at Corey Union, which replaced 18 fixtures, has offset about four metric tons of carbon emissions. Those fixtures in Corey Union had been using 18-watt bulbs and were reduced to 9-watt LED bulbs.

Brubaker is hoping to retrofit fixtures in the Miller Building before the end of the summer and begin further projects in Corey Union this fall. Further fixture replacements will occur across campus in the years to come.

These energy efficiency projects are part of a larger push by the College to reduce overall campus energy use which directly supports its commitment to greenhouse gas emissions reductions. SUNY Cortland was the first SUNY campus to sign the American College and University Climate Commitment, pledging to attempt to eliminate its greenhouse gas emissions by 2050. The College is already purchasing renewable energy certificates for all of its electricity and was the first SUNY campus to achieve a gold rating in Sustainability Tracking, Assessment & Rating System (STARS) from the Association for the Advancement of Sustainability in Higher Education (AASHE).