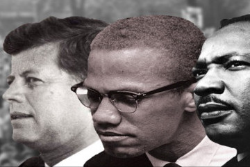 The free performance of “Project Unspeakable,” one of SUNY Cortland’s Black History month events, will start at 7 p.m. in the Student Life Center, room 1104.   Light refreshments will be served.

“Project Unspeakable” explores the idea that there was a connection among the three high-profile killings and maybe even a conspiracy based on opposition to the social justice and civil rights movements of the 1960s.

Inspired by James Douglass’ book, JFK and the Unspeakable: Why He Died and Why It Matters, the performance features ten readers speaking the words of more than 60 different real-life people. The play seeks to end what the author considers to be “official” silence and deception that has surrounded the "unspeakable" assassinations of these three prominent leaders.  The ArtRageous Players from Syracuse will present the dramatic readings based on the book.

The event is co-sponsored by the College’s history, political science and sociology/anthropology departments and United University Professions.

“Project Unspeakable” has been performed around the country for several years. It involves hundreds of dramatic readings or full performances.  During the course of this performance, some of the "unspeakables" of today  – such as school-to-prison pipelines, economic disparity and police brutality – will be raised.