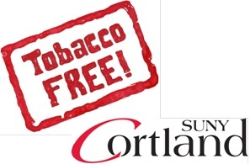 
Members of the SUNY Cortland community will soon begin to see a dramatic, red “Tobacco Free” message stamped above the familiar College logo on public health messages around campus.

The logo became the official symbol of SUNY Cortland’s campus-wide anti-tobacco campaign recently, when the College’s Tobacco Advisory Committee selected it as the winning design for its logo contest.

Samantha Wong, a junior communication studies major from Massapequa, N.Y., created the logo and won the grand prize of a classic Schwinn bicycle.

“I did the logo for a class assignment,” said Wong, who learned about the contest through a class taught by Distinguished Service Professor Sam Kelley. “I sat down one night and I thought it would be really cool to be picked. I thought of it as an opportunity and worked really hard on it.”

Wong’s winning entry will be used by SUNY Cortland to encourage people to forego cigarettes, cigars and chewing tobacco before Jan. 1, 2013. That’s when the entire campus will become tobacco free. That means no tobacco products can be used on campus, and members of the SUNY Cortland community who smoke or chew tobacco will have to do so off the College grounds.

All forms of tobacco use pose significant health risks, including chewing tobacco, which can cause throat and mouth cancer, tooth decay, gum disease and nicotine addiction. Evidence assembled by the U.S. Surgeon General, Centers for Disease Control, Environmental Protection Agency, and World Health Organization, which demonstrates that tobacco is a profound agent of deadly diseases, responsible for millions of deaths worldwide each year, both to tobacco users and non-users.

Amanda Cheetham, a senior health education major, and William Parente, a College custodian, tied for second place in the contest. Cheetham created a logo that highlighted the Cortland “C” in the word “community” to focus on how students, faculty and staff were working together to improve health. Parente wrote a series of rhyming slogans about the dangers of tobacco use.

Both second-place winners will receive gift certificates for massages from local therapists.

The College, which aspires to be one of the healthiest campuses in the United States, was one of the first SUNY schools to adopt a “tobacco free” policy.

The American Cancer Society recognized SUNY Cortland as one of its “Partners in Excellence” for the tobacco-free decision in November 2011. In addition to the increased awareness of tobacco’s health hazards, SUNY Cortland will offer a variety of tools and programs to help smokers and other tobacco users quit.