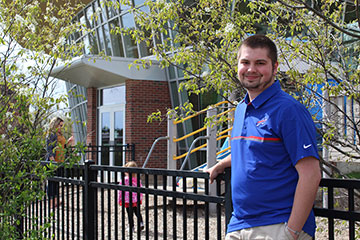 However, since both are putting themselves through college by patching together numerous part-time jobs, a college study-abroad experience always seemed financially out of reach.

And, having reached nearly the end of their academic careers, the School of Education students are finished with all but their student teaching, typically completed in New York state schools, until they graduate in December.

Yet this summer, the two will embark on the adventure of a lifetime. Both Fischer and Busch will begin their student teaching requirement in Queensland, Australia, classrooms.

It’s possible because both seniors were successful in obtaining expense awards of $3,500 each from the U.S. Department of State under the prestigious national Benjamin A. Gilman International Scholarship program.

Gilman Scholarships, managed through the State Department’s Bureau of Educational and Cultural Affairs, have helped send more than 25,000 ambitious students of limited financial means to pursue academic studies or internships around the world since the highly competitive national scholarship was started in 2001. The program aims to better prepare college students to thrive in the global economy and to expand the number of Americans studying and interning abroad, thereby gaining skills that are critical to U.S. national security and prosperity.

SUNY Cortland students have earned a total of 13 of the coveted awards, all of them since 2006.

“It’s my first study abroad experience,” said Fischer, a childhood and early childhood education major from Syracuse, N.Y. A non-traditional student who transferred in Spring 2016 with an associate’s degree from Onondaga Community College, she studied Spanish and Italian before college. But she is glad there won’t be a language barrier for her student teaching experience.

“I’ve been saving money for two years to study abroad,” said Busch, an inclusive childhood education major from Irving, N.Y., who studied French in high school and once took a class trip to Italy and Greece. “And Australia’s a place I always wanted to go to so that makes it even better.”

Only 23 other SUNY students across New York earned the summer scholarships. Fischer and Busch bring to three the number of SUNY Cortland students who have won Gilman Scholarships so far in 2018. Raheemah Madany, the third recipient, traveled to Germany in the spring.

“It’s pretty cool to have that many people and two of us from the same program that have gotten the Gilman Scholarship,” Busch said.

The two Gilman scholars are among 16 college students enrolled in SUNY Cortland’s Australia Student Teaching program on the Sunshine Coastfor 13 weeks from June 13 to Sept. 15. Offered for 15 years at the College, the program involves collaboration with Australian schools. Colin Balfour, who directs the program, already introduced the students to their future classroom mentors via four skype conferences held this spring in the College’s Sperry Center.

The Australia Student Teaching program will constitute their first required school placement as student teachers. It will give them a professional edge as not many American educators can boast having the opportunity to immerse themselves in a different country’s classroom culture and educational policy put into in practice.

“Having the chance to student teach in a different country gives you a greater perspective on our education system here, on teaching different students and on just being a teacher in general,” said Busch.

“They’re open to trying new things,” Fischer said of the typical Australian school setting he and Fischer are headed to. “They’re not stuck in this system that is struggling and constantly trying to dig themselves out. They are trying all these different, new and innovative approaches to education.”

“The wonderful thing about education is that the system may differ from district to district, state to state, and even country to country, but children are children no matter where they go to school,” said Fischer. “So what I learn in every classroom is relevant to future classrooms.”

As future teachers, both Fischer and Busch are required to take a heavily structured course load, and haven’t had much time available for possible opportunities to learn in other countries.

“Due to the rigorous demands of New York state teacher education programs, studying abroad is often not an option for education majors,” Fischer explained.

As seniors, they will need to complete their required semester of student teaching. And, like all their fellow School of Education classmates, by then they will have already completed hundreds of hours of field experience and thus have had to plan their time wisely.

Even if their schedules had been more flexible, financial issues stood in the way of an international education experience for both Fischer and Busch.

Fischer works two jobs when not in school. For the last three years, she has served as a customer services representative at a shopping mall adventure center during breaks and year-round as a server at a chain restaurant.

Busch had a job as an R.A. in Smith Tower since his sophomore year. Until recently and for the last seven years, he worked as a summer camp counselor. Busch also is employed at the SUNY Cortland Child Care Center and sometimes substitute teaches in the Cortland City School District.

That’s why the Gilman awards are game changers.

The Gilman Scholarship application process is competitive, said Julie Ficarra, associate director of study abroad at SUNY Cortland. Among other requirements, scholarship candidates write essays describing what they’ll accomplish in their host country and how they’ll promote the importance of study abroad upon their return.

“Our students started submitting successful applications ever since,” Schlarb said. Ficarra, Jerome O’Callaghan, associate dean of arts and sciences, and other faculty even reviewed the school applicants’ essays to help increase their success rate.

“The Benjamin A. Gilman International Scholarship is one of the most prestigious study abroad awards that U.S. study abroad students can receive and we in the International Programs office are so very proud of all of those students who took the time and effort to apply, but especially of this summer’s two recipients,” Ficarra said.

Gilman Scholarships usually go to students who choose more non-traditional study abroad destinations such as Latin American, Africa and Asia, Ficarra noted. So it’s remarkable that both Fischer and Busch will participate in the English language program in Australia.

“Their receiving these awards is a testament to how well they were able to articulate precisely how student teaching in Australia will impact them academically and professionally, and how they plan to give back to the field of international education,” Ficarra said.

Busch agrees that he and Fischer successfully promoted the Australia Student Teaching Program to the Gilman scholarship reviewers.

“Many people study abroad in their G.E.s. (general education courses) and those are important classes, too, don’t get me wrong,” Busch said. “But as a future educator, the classes that are really important to whatever you’re going to do in the future are your education classes or student teaching. Having the chance to student teach in a different country gives you a greater perspective on our education system here, on teaching different students and on just being a teacher in general.”

Fischer eagerly awaits her arrival in an Australian classroom.

“What I see is they are interested in building community within the school, and it’s more than just words,” she said. “They are looking to involve the families of the kids, including more of what’s going on in their lives into the classroom. It seems to be working very well for them.”

Fischer and Busch will finish their second student teaching placements at yet-to-be-named U.S. school districts in the fall and graduate in December. Fischer aspires to begin teaching English language arts while she pursues a graduate degree in library sciences. She considers her career goal an homage to the middle school librarian who turned her on to books.

Busch wants to begin teaching elementary-level children with an eye on eventually becoming a school administrator.

Upon their return from Australia, as a required service project Fischer and Busch will develop presentations to encourage current SUNY Cortland students to consider study abroad, particularly those majoring in education fields.