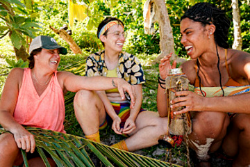 
Tiffany Reiss Seely ’95 is ready for the challenges, the alliances and everything else that goes with being a contestant on season 41 of CBS’ “Survivor.”

After all, she considers herself a “previvor.”

When Seely was a senior in high school, her mother, Shevi Reiss, died of ovarian cancer at age 38.

It was a heartbreaking and tragic period of Seely’s life. And it inspired her to go to SUNY Cortland and major in elementary education. Being a teacher would provide the ability for Seely to follow her passion to guide the children of others during the day while having the flexibility to be able to care for her own children on nights, weekends and holidays.

Twelve years after graduating from Cortland, Seely, happily teaching and a mother of two boys, was encouraged by a friend to ask her doctor about the BReast CAncer (BRCA) gene test. In addition to her mother, Seely’s mother’s aunt had died of breast cancer at age 70.

The test back positive for the BRCA 1 gene, with doctors estimating Seely had an 87% chance of breast cancer and a 44% chance of ovarian by age 70.

Seely was 33 at the time. Five years younger than her mother when she passed away.

So Seely decided to undergo a prophylactic double mastectomy with reconstruction and a Salpingo-Oopherectomy, a surgery that removes both fallopian tubes and both ovaries.

“That was the best decision I’ve ever made in my life,” Seely said.

She’s a previvor — the term used by people who are genetically predisposed to cancer but have not been diagnosed because they’ve taken preventative measures.

Now, at 47, Seely is happy, healthy and excited for everyone to watch her on the newest season of “Survivor,” which begins at 8 p.m. on Wednesday, Sept. 22 on CBS. She credits the BRCA test and the choice to have those surgeries as giving her a second lease on life.

“Maybe I was just so naïve or I was feeling so blessed that I could do something before it got me that really, for me, it was easy,” Seely said. “I’m a little different kind of person. It was not traumatic for me like most people would explain it. For me, I’ve seen the worst of the worst. Loving my children as much as I love them, I couldn’t imagine in a million years saying to my kids what my mother had to say to me. I just couldn’t even think of it. That would kill me. That would be traumatic to me.”

A longtime fan of the show, Seely decided to send in a video audition to “Survivor” in 2018. After a whirlwind of false starts, casting trips to Los Angeles, COVID-19 delays and at first being selected as an alternate, “Survivor” picked Seely at the last minute just before shooting began in March in Fiji’s Mamanuca Islands. She’ll be one of 18 competitors looking to outwit, outplay and outlast the others for a $1 million prize.

“It kind of reminded me of college,” Seely said of arriving on set. “It was really fast and I loved it so much. I had a great college experience. I would do anything to go back, that kind of feeling. I literally said when I was out there, ‘This is like my freshman year of college.’ I’m 47 years old but I feel like I’m in my twenties. It’s so unbelievably unreal to be standing on the sand other players were on.”

Seely, from Plainview, N.Y., is a middle school English teacher at Jamaica Academy in Queens. Her childhood experiences of working at a counselor at day camps inspired her to seek a career in education.

Jamaica Academy serves students who have been suspended from other New York City schools. Seely hopes that her run on “Survivor” can be a way she further engages students and teaches important life lessons.

“I work very hard to connect with them socially and emotionally,” Seely said. “I think this show can show them that me at 47 and having had trauma in my life, with stick-to-it-iveness, I was able to do this crazy thing I never thought I’d be able to do.

“It will be very cool for them to be able to see me in my room that they can see me on TV. Students, no matter what age, they think you sleep at school. They think you live there. My students in particular, they’re going to put me through it. They’re a tough crowd but I think they’ll have fun with it. I’ll be glad to talk to them about perseverance and camaraderie and reading the room and things like that.”

Seely is the second SUNY Cortland graduate to recently appear on “Survivor.” Tommy Sheehan ’14, a fourth-grade teacher at Floral Park-Bellerose Union Free School District on Long Island, was the Season 39 champion in 2019.

A high school volleyball referee in his spare time, Sheehan has crossed paths with the Seelys before, having had refereed some games for Tiffany’s son, Sean Seely, who plays for Bethpage High School.

“I guess I’m not winning mother of the year, I haven’t been to all the games, and I must have missed some of the games he was at, but he’s a referee for this area,” Seely laughed. “And I had no clue. But as big as the “Survivor” world is, it starts to become small once you’re in it. It’s very strange. Cortland I guess pushes out “Survivor” people. I don’t know what it is. Maybe something in the water. Or the beer.”

Will Seely be Cortland’s second “Survivor” champion? Time will tell.

Regardless of what happens on the show, Seely is grateful simply to compete. And she’s grateful for her sons, her husband, her students and her friends. She’s grateful to be alive.

Seely hopes others will consider taking the BRCA test and talk to their doctor about their options.

“Take the test. Knowledge is power,” she said. “Take the test and find out. I’d be more afraid to find out I was sick than to find out I had something that predisposes me to being sick and being able to do something about it. Even if that means being super, super vigilant and doing tests much earlier. People are afraid to hear they have something like that. It’s scary. But I would encourage anyone with a family history to be proactive and not reactive.”