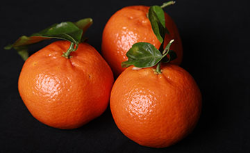 
The first vitamin that people think of is ‘C.’ Everyone knows they need to swallow just one tablet daily or take a sunny swig of fruit or vegetable juice to stay healthy. It’s simple.

But according to Patricia Conklin, SUNY Cortland professor of biological sciences, the vitamin — also called ascorbic acid — is anything but simple.

Humans first recognized its powers as early as 1753. Early scientist James Lind wrote a “Treatise on the Scurvy,” in which he described his research on the curative effects of citrus fruits on scurvy, the devastating disease that plagued sailors of the era.

However, yesteryear’s biologists didn’t have any idea why eating oranges and lemons worked. L-ascorbic acid, the chemical agent responsible for the prevention of scurvy, wasn’t identified until 1932.

Conklin plans to explain all this and more on Thursday, Dec. 1, at SUNY Cortland.

Conklin will deliver the lecture as only the second recipient of the Dr. Peter DiNardo ’68 and Judith Waring Outstanding Achievement in Research Award.

A reception will follow at 5:30 p.m. in the Bowers Hall Lobby.

When it comes to ascorbic acid, few people know that plants have a distinct advantage over primates, including humans, Conklin noted. Namely, plants can thrive because they metabolize their own supply of Vitamin C. By comparison humans, other primates and a few other animals will wither on the vine, so to speak, if they can’t find and consume the chemical agent somewhere in nature.

“Plants synthesize ascorbic acid not because of altruistic intent but rather because in plants ascorbic acid has a major role as an antioxidant, is required for the activity of several enzymes, and also acts as an important signaling molecule,” Conklin said.

In Act I, she will address the question of why humans are unable to make ascorbic acid while plants and many other animals can.

“Note that plants make ascorbic acid via a very different process than do animals,” Conklin said.

In Act II, Conklin will summarize the understanding of how plants synthesize this important small molecule.

In closing, she will explain how this basic plant biology research is relevant to our future.

Conklin received the DiNardo Award for her ceaseless efforts to further the field of molecular genetics, said Bonni Hodges, chair of the College Research Council, which screens all award nominations and recommends their choice to Mark Prus, provost and vice president for academic affairs.

A molecular geneticist, Conklin is internationally regarded for her studies on the regulation of ascorbic acid biosynthesis in plants, Hodges noted.

“Her research is of considerable interest because vitamin C is a powerful dietary nutrient in humans, but also because it is an important antioxidant and protectant from photo-oxidative stress during plant growth,” she said.

Conklin’s work has led to collaborations with the field’s top research labs at the University of Exeter in Great Britain and the Boyce Thompson Institute at Cornell University, Hodges noted. She involves undergraduates as research assistants in her work, most recently by taking two students with her to Great Britain for a month. Her findings have been published in Plant Physiology, Journal of Experimental Botany, Journal of Biological Chemistry, and Plant, Cell & Environment.

Conklin’s contribution to science could be used to develop and test “more resilient crop strains to meet the dietary and biofuel needs of our growing population during a time of climate change,” Hodges said.

The DiNardo-Waring Award, named after the late Peter DiNardo ’68 and his wife Judith Waring, seeks to celebrate the role that research plays at a primarily undergraduate teaching institution. DiNardo, a SUNY Cortland graduate, was an outstanding educator who influenced the modern, clinical practice of psychology in the areas of fear, panic and anxiety on an international scale. A SUNY Distinguished Teaching Professor of psychology who taught 34 years at SUNY Oneonta before his death in 2008, DiNardo’s dedication to students earned him a 1995 SUNY Chancellor’s Award for Excellence. Waring established the $1,000 award in 2014 to annually honor a SUNY Cortland faculty member for research conducted outside the classroom.