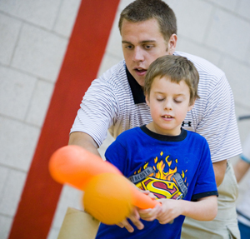 Faculty members of the Physical Education Department selected seven women and six men for the recognition, and the students received certificates.

The Alway Award, given to women, pays tribute to the late Lenore K. Alway, the pioneer head of women’s physical education at the College from 1941 to 1965. The men’s award honors the late Anthony P. Tesori, a 1939 graduate who earned the College’s C-Club Hall of Fame Award for his achievements before and after graduation and gave the College many years of leadership in athletics and administration.

The Alway Award honorees and the schools where they completed their teaching for Fall 2014 are:

The Tesori Award honorees and the schools where they completed their teaching for fall 2014 are:

For more information, contact the Physical Education Department at 607-753-5577.