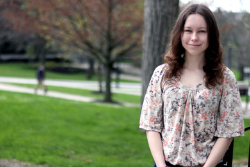 
SUNY Cortland senior Rebekka Higgins received an email over this past winter break from assistant professor Timothy Delaune of the Political Science Department.

How would she like to enter the SUNY-wide Benjamin and David Scharps Memorial Legal Essay Award contest?

Higgins was up for the challenge.

She won first place among all entries in the SUNY system with her 2,000-word essay on this year’s selected topic: concealed carry on campus.

“It’s not an opinionated essay,” she said. “It’s a closed-universe essay question, so they give you a hypothetical law case and they give you a couple of cases and sources to use. Based on your interpretation of those sources, you advise the judge on what you think the outcome of that case should be.”

The Scharps Essay Award contest is open to SUNY students in the junior or senior years and is judged by a team of SUNY campus legal counsel and professional staff. It is named after Benjamin Scarps and David Scharps, brothers who were both attorneys.

Students were provided with a fictional scenario in which multiple stakeholders react to passage of a law that permits concealed carry on college campuses. Their task was to act as a law clerk and draft a memo on the constitutional arguments presented in the case.

Higgins, a dual political science and criminology major from Queens, N.Y., was given five cases to reference for her argument and she used three in the essay. She chose District of Columbia v. Heller, National Rifle Association v. Bureau of Alcohol, Tobacco, Firearms and Explosives and Federal Communications Commission v. Beach Communications, Inc. Higgins was also able to use the Second and Fourteenth Amendments to make her argument in her essay.

Previously, Higgins had written case briefs as assignments in Delaune’s constitutional law class, which helped prepare her for the contest. She also is taking SUNY Distinguished Service Professor Robert Spitzer’s course on gun control this semester. That has expanded her expertise on the subject matter.

“His class is extremely interesting and he is very knowledgeable,” she said of the SUNY Cortland professor of political science. “My knowledge on this topic has just grown from his class.”

In addition to her academic work, Higgins has completed internships with the City of Cortland Police Department, the Cortland County District Attorney’s Office and the office of Cortland Mayor Brian Tobin.

After graduating later this month, Higgins plans to gain more experience before she settles on her academic future.

“I’m one of those people who has a broad interest in a lot of things,” she said. “I’ve never exactly known what I want to do but law is definitely something that interests me. After I graduate, I want to work a little bit and really make sure I know what I want to do for grad school so I’m sure I’m going to grad school for what I really want to pursue.”