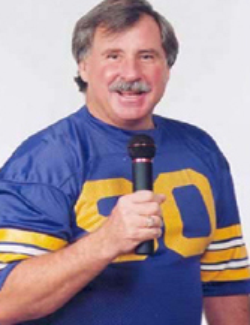 
One night of alcoholic excess can destroy a college career, if not a life.

SUNY Cortland has invited Michael “Greeny” Green, a man who understands that fact very well, to speak to first-year and other students about it on Wednesday, Sept. 25.

The Health Promotion Office and the Student Development Center, which work to help students fulfill a College priority of well-being, have asked Green to discuss “The Four Stages of Drinking” at 8 p.m. in the Corey Union Function Room.

The talk, supported by the College’s Student Conduct Office, is free and open to the public.

Green, who is the president of Collegiate Consultants on Drugs and Alcohol, draws on his background as an athlete, coach, educator and recovering alcoholic to provide him with the know-how to help students create a low-risk relationship with alcohol.

“Even the ‘one night problem’ can have a lifetime of consequences,” said Green, who has experienced  firsthand the dangers that drugs and alcohol pose for many students.

The founder of Collegiate Consultants, he has presented on more than 2,000 college campuses nationwide in his effort to make drug and alcohol awareness and education an integral part of every student’s life. Green is a recognized leader in the field who has earned the respect of both his colleagues and the students he has counseled.

Green serves as a consultant to the student affairs and athletic departments of numerous universities including Boston College, Florida State, Pennsylvania State, Brown, Princeton, Hobart College and the University of Vermont.

At the request of Sen. Bill Bradley, Green developed drug and alcohol programs for New Jersey high schools. In the non-academic setting, he produced programs for the New Jersey and Virginia medical societies and for professional sports teams including the Philadelphia Flyers.

He produced a series of videotapes that include many of the innovative “think before you drink” techniques demonstrated during actual presentations.

As a defensive lineman, he received All-Pennsylvania Conference and All-State Honors and a tryout with the Philadelphia Eagles. A high school athletic director, Green has coached Division II football at West Chester University.

Sponsored by the Health Promotion Office and the Student Development Center, the Fall 2013 “Wellness Wednesday” series continues each Wednesday through the end of the semester at 7 p.m. in Corey Union Exhibition Lounge, unless otherwise noted. The events are free and open to the public.