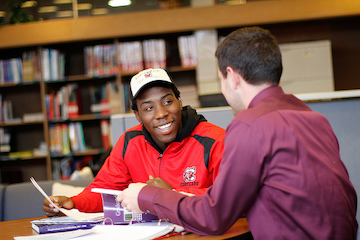 
SUNY Cortland is one of the best educational investments in the nation, according to Money magazine’s recently released “Best Colleges For Your Money” rankings for 2017.

Money placed Cortland in the top 5 percent of all four-year colleges in the United States, ranking it at 111 out of 2,400 institutions reviewed.

The rankings are based on the cost of attendance, the quality of education and the success of alumni. In other words, the magazine attempted to measure students’ likely return on investment from pursuing a bachelor’s degree at each of the nation’s colleges and universities.

“We are extremely pleased, but not surprised,” SUNY Cortland President Erik J. Bitterbaum said. “We’ve always known that we offer a world-class education at an affordable price. We’ve long been aware that most SUNY Cortland alumni go on to have very successful careers in teaching, athletics, medicine, communications, business and a wide variety of other fields.”

Money released its annual “Best Colleges” survey on Monday, July 10, with Princeton University in the No. 1 spot. Only one comprehensive SUNY school, SUNY Brockport at 93, ranked higher than Cortland.  The evaluation did not consider the Excelsior Scholarship program announced late this spring, which could dramatically lower costs for eligible SUNY students even further.

“You’ve heard of the Ivy League? Nowadays, bragging rights are going to colleges in what we'll dub the ‘Paycheck League’ — schools that the real numbers show provide a boost in the job market,” wrote financial journalist Kim Clark in the introduction to Money’s survey findings. “Objective data on alumni success debunk the myth that the best schools are exclusive.”

A total of 711 schools met these requirements. At No. 111, SUNY Cortland ranked in the top 15 percent of schools that met Money’s minimum standards. The magazine determined the ranking of that list by using 27 factors designed to measure educational quality, affordability and career outcomes.

Those factors include graduation rates, total costs, financial aid, student debt, graduate earnings, market value of skills learned and the percentage of students each college moved from poverty into the middle class by the time a graduate is 34 years old.