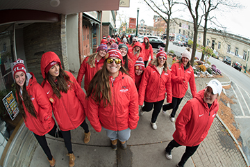 
Nine out of every 10 people participating in October’s Cortland-area CROP Hunger Walk was from SUNY Cortland, giving members of the College community a leading role in this year’s $12,700 fundraising effort against hunger.

Of the 411 people who walked in the 24th annual event, 374 — 91 percent — were students, faculty or staff from SUNY Cortland. The amount of money raised this year marked a nearly 43 percent increase from the $8,900 generated by last year’s CROP Hunger Walk.

People connected with the College raised 53 percent of that money, which will go to fight world hunger and support local food pantries. Churches in the Cortland and Homer area raised the remainder of the funds.

Cortland-area food pantries and feeding programs will receive 25 percent of the funds raised by the event, with the rest going to anti-hunger programs around the world. Church World Service sponsored 900 walks and raised $9 million from 107,000 participants in 2017.

The event is supported by a number of campus organizations, with donations coming from SUNY Cortland’s athletic teams, fraternities and sororities, clubs, residence halls and COR 101, the semester-long orientation class taken by all first-year students.

Several campus groups will receive plaques for their contributions. The softball team was the athletic leader for a fourth consecutive year, raising $2,250. Delta Phi Epsilon sorority raised $458 to lead all Greek organizations and Alpha Phi Omega, a co-ed national service fraternity, raised $470 to place first among clubs and other organizations. Clark Hall gave $530 to lead the residence halls. A total of $1,205 was donated from unaffiliated College sources.

The 2018 Hunger Walk surpassed the 2017 event in both donations and participants. Last year, the event attracted a total of 350 walkers.