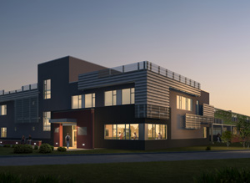 
A grand opening ceremony for the SUNY Cortland Professional Studies Building will be held at 2 p.m. on Friday, April 8.

The facility, which has an older wing that was formerly called Studio West, faces Folmer Drive and Pashley Drive and is located near Tompkins Street.

President Erik J. Bitterbaum will preside over the ceremonies in Room 1176, which are free and open to the public.

A reception and tours will follow the event. Department representatives will be available to explain to visitors the use of these highly customized academic areas.

The new building occupies the existing parking area and part of the lawn on the east side of the former Studio West.

The project completion has allowed for the consolidation of all the School of Professional Studies academic departments into one complex, with the exception of the Health Department, which elected to remain in the Moffett Center, and the Physical Education Department, which has remained in Park Center. In March, the President’s Cabinet officially renamed both structures comprising the facility the Professional Studies Building.

“The College’s commitment for the addition and renovation of Studio West reinforces the transformation and identity of the building as the home of the School of Professional Studies,” Cottone said.

The new building’s first floor features an 8,000-square-foot clinic for the Communication Disorders and Sciences Department, which had been housed in the McDonald Building on Tompkins Street. The clinic includes an audiology chamber, observation and therapy rooms, a library and a resource area. A small, dedicated parking area offers convenient access to clients from the community.

The Recreation, Parks and Leisure Studies Department moved into the new facility from its current location in the Park Center. The department has an outdoor education laboratory, a play teaching area and academic equipment staging and storage areas on the first floor.

The second floor, which occupies 7,000 square feet, houses 23 offices and the two department offices for Communication Disorders and Sciences as well as Recreation, Parks and Leisure Studies.

The Center for Obesity Research and Education, with its laboratory, testing room, library and resource area, is situated in a 2,000 square foot area in the middle of the building. A new motor behavior testing laboratory and computer lab have replaced those located in the Park Center and are adjacent to the existing biomechanics lab, which underwent minor upgrades.

The Kinesiology Department, with 18 offices, is located near the west end of the renovated building.

“Our vision and priority to focus on academic excellence has been realized through the improvement in functional space that is complemented by state-of-the-art instructional resources,” Cottone noted. “This new environment will present the faculty and staff with the opportunities to advance student learning and success.”

The new building construction began in mid-November 2009, while renovation of the former Studio West facility began in March 2010. Both the new facility and the renovation were completed in time for the start of the Spring 2011 semester.

Constructed in 1948, the 50,000 square-foot Studio West was home to the Overhead Door Co. for many years. In 1968, SUNY Cortland wanted to relocate its maintenance operation from Old Main, so the College purchased the facility. Four years later, the maintenance operation moved to its present location near Route 281, but the building continued to be used by the grounds crew as storage space. In 1994, the Construction Fund allocated $3.2 million for the rehabilitation of Studio West. Design work commenced and the actual construction, started in 1996, was completed ahead of schedule in March 1998 to be used as flexible office and classroom space. In the most recent upgrade, the facility has retained its original footprint while undergoing significant interior changes.

The building has met Leadership in Energy and Environmental Design (LEED) silver certification standards, meaning that the materials and programmatic goals associated in its design and construction have met the nationally accepted benchmark for high performance green buildings. It is partially heated and cooled by 40 geothermal wells that were dug 400 feet underground on the building’s west side.