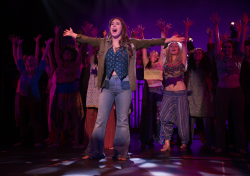 
When Sean Noonan visited SUNY Cortland for the first time, it was by coincidence that his campus tour aligned with dress rehearsals for the College’s major spring musical.

“You get a good feel for the major and the environment just by watching the shows,” said Noonan, a senior musical theatre major from Water Mill, N.Y. “I was blown away, and I knew Cortland was the place.”

The College’s current crop of student talent will take center stage as part of an Open House for prospective musical theatre majors on Friday, Oct. 21 — an event that offers a more intimate campus visit experience for students interested in SUNY Cortland’s Performing Arts Department. Prospective students can learn more about life in the classroom during the day, then at night attend SUNY Cortland’s production of “The Laramie Project,” a play about the reaction to the 1998 murder of a gay college student in Laramie, Wyo.

Online registration for prospective students and their guests is now open.

Noonan will play a lead role as Stephen Belber, a member of the theatre company studying the murder for a series of short skits. By the time he graduates, Noonan will have appeared in more than 10 major productions at the College. The opportunity to be seen is one of the Performing Arts Department’s major benefits, he said.

“We’re a more intimate program, which means we get a lot more one-on-one training,” Noonan said. “In a bigger department, you lose that. Here, instead of just being a face, you’re able to connect with professors and get the feedback you need.”

Emily Woods will play fellow theatre company member Kelli Simpkins in “The Laramie Project,” the fourth time she’s been cast in a campus production. When she auditioned at SUNY Cortland, she sensed authentic enthusiasm among current students for both their major and the College.

“You could tell that it wasn’t scripted,” said Woods, a junior musical theatre major from Staten Island, N.Y.

Visitors will hear from faculty members and current students like Noonan and Woods at the Performing Arts Open House event. They can tour the College’s Dowd Fine Arts Center, which received a $22 million renovation in 2014 that brought major upgrades to the 477-seat Dowd Fine Arts Center Theatre in addition to a renovated recital hall, dance studio and rehearsal rooms. The cast of “The Laramie Project” also will perform selections from the play during the afternoon.

Prospective students will learn about the many opportunities to shine in musicals, classic and contemporary plays and student-directed works. Those opportunities have propelled musical theatre alumni to roles in national tours and on Broadway.

Both Noonan and Woods have goals of performing in a big city. This past summer, Noonan earned a contract to work at Tibbits Opera House in Coldwater, Mich., where he was cast in “Oklahoma!” and “The Addams Family.” His paid experience there served as proof that his talent and skills have grown exponentially since his high school days.

“Coming to Cortland, I got that artistic gratification of being in so many shows in one year,” he said. “Learning about music and theatre and dance together without being restricted … that’s been one of the best parts.”

“You get the musical theatre major feel but on a real college campus,” she said. “To me, Cortland was more than just an arts school.”