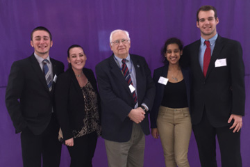 
SUNY Cortland’s Model European Union (MEU) student group is preparing to take a trip to Brussels next month for its major annual simulation event — at a crucial time when the union of 28 member states continues to make headlines for issues related to the migrant crisis, attacks in Paris and the economy.

Seven students will journey to the EU’s capital city in Belgium for the SUNYMEU simulation that runs four days beginning Wednesday, Jan. 6. They’re part of a three-credit political science course offered during the fall that culminates with the capstone trip. Distinguished Service Professor Henry Steck has trained participants since SUNYMEU’s inception at the College in 1988.

“There are significant learning outcomes for our students,” Steck said. “The MEU experience has been a transformative moment for them to enhance their knowledge of the European Union.”

It’s been a busy year so far for the student participants, with discussion topics ranging from negotiations of the Transatlantic Trade and Investment Partnership (TTIP) to the FIFA soccer scandal. Their all-important trip abroad involves a major role-playing simulation that includes more than 140 students from across the SUNY system and Europe, including Belgium, Bulgaria, France and Germany.

The idea is to put students in the shoes of representatives from EU nations. Delegations for each country are comprised of four-person teams, with each student playing the role of a politician from that country. This year SUNY Cortland students will represent Croatia and Spain at the event and speak on topics that include economics, separatist movements in Spain, the migration crisis and security issues in the Middle East.

“You get to meet a lot of people who are very passionate about issues in Europe,” said Michael Braun, a senior political science major from Elmont, N.Y. “It’s like we’re creating real solutions for these issues.”

Support for the trip comes from the Haines Fund, the International Programs Office and the Clark Center for International Education. Students represent majors across the College, including political science, international studies, sport management and exercise science.

SUNYMEU is organized by SUNY’s Institute for EU Studies; the SUNY Office of Global Affairs; SUNY New Paltz; and Vesalius College in Belgium, where the simulation event will take place. Each year, the event alternates between venues in Europe and a SUNY campus. SUNYMEU and Vesalius College have formed a permanent partnership to strengthen transatlantic relationships among the next generation of global policy makers.

Steck said the trip is a rare cross-cultural opportunity that allows the College’s students to work in a mature environment with their peers from Europe. SUNY institutions were the first in the nation to organize a model EU simulation and SUNY Cortland has been a steady participant since its founding, Steck said.

For more information on the SUNYMEU event, visit its website.