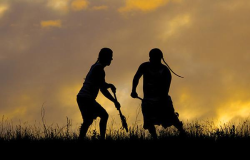 
Michael Taylor, an instructor at SUNY Oswego and Onondaga Community College and visiting scholar at SUNY Cortland’s Center for Gender and Intercultural Studies, will discuss “The Native American Athlete” on Friday, Nov. 2, as part of Native American Indian Heritage Month.

The presentation, which begins at 4:30 p.m. in Old Main Colloquium, will examine stereotypes of Native Americans, focusing on sports, athletics, entertainment, gender and the physical body. By addressing these varied stereotypes, the lecture will consider the connection between these areas, showing how myth and reality can confuse the ideas that the public holds about Native people.

The College’s Native American Studies Program will offer its Native American Film Series on Tuesdays beginning Oct. 30 with “Lake of Betrayal.” The three films will be shown at 4:30 p.m. in Sperry Center, Room 106, and are free and open to the public.

“Lake of Betrayal” looks at the Seneca Nation’s fight to protect its sovereignty against a backdrop of a federal Indian termination policy, pork-barrel politics and undisclosed plans for private hydropower generation. The Kinzua Dam was built in 1965 as a reservoir and took vast tracts of Seneca land in western New York. This documentary takes a long view of the imposed changes on the Seneca’s way of life that have led to major economic benefits and irreplaceable cultural losses.

On Nov. 6, “What was Ours” will be shown. It is the story of how a young journalist and a teenage powwow princess, both of the Arapaho tribe, traveled together with a Shoshone elder in search of missing artifacts in the vast archives of Chicago’s Field Museum. They seek to recover lost their objects and explore the question, “who owns the past?”

The Nov. 13 film, “Spirit Game,” is the story of how lacrosse originated with the Iroquois, which they call the medicine game. In 2015, the Onondaga Nation hosted the world championships on native soil for the first time ever. Here, less than 30 miles north of Cortland, N.Y., history, politics and culture collided on the playing field before the eyes of the world.

The film series is sponsored by Auxiliary Services Corporation, Native American Studies Program, the Center for Gender and Intercultural Studies and the Provost and Vice President for Academic Affairs Office.