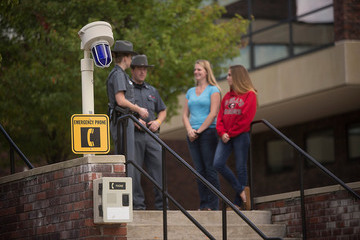 
SUNY Cortland is located in the safest college town in New York and one of the safest in the United States, according to a new study.

Safewise, a home security research company, placed Cortland on its list of the 30 Safest College Towns in America. Cortland, which placed at No. 20, was the only community in New York state to make Safewise’s rankings.

“Our students’ safety is our top priority, and we are fortunate to be part of a caring, close-knit community like Cortland,” SUNY Cortland President Erik J. Bitterbaum said. “The new ranking doesn’t surprise those of us who live here, but it should give students and families some peace of mind.”

The security experts at Safewise analyzed the most recent Federal Bureau of Investigation crime statistics available, comparing them to the population of each U.S. city with least one accredited higher-education institution.

“The City of Cortland and SUNY Cortland work well together to provide a safe living and learning environment for students, faculty, and staff,” Cortland Mayor Brian Tobin said. “We have a great college town feel that is appropriate for students of all backgrounds. As mayor, I am pleased to see the recognition of Cortland as being one of the safest places for students in the country.”

Tobin knows both sides of the city and college equation. In addition to his role as city mayor, he also coaches the College’s men’s and women’s swimming and diving teams.

In its report, Safewise lauded SUNY Cortland’s University Police Department (UPD) for its efforts to patrol the campus, noting that it recently moved into state-of-the-art facilities in Whitaker Hall. UPD’s 21 uniformed officers monitor activity on foot, on bike and in patrol cars and they also keep a watchful eye via extensive video surveillance. The College’s 27 emergency blue light phones allow students to quickly and easily report emergencies or suspicious activity 24 hours a day.

Safewise also highlighted the College’s shuttle bus system as a way of safely moving students from residence halls to classes and local entertainment and shopping options.

The report was only the most recent study to rank SUNY Cortland on a national scale.

SUNY Cortland was also recently named one of the “Best Colleges For Your Money” by Money magazine. The College ranks in the top 5 percent of all four-year colleges for its combination of educational quality, affordability and alumni success.

The Princeton Review, meanwhile, recently rated SUNY Cortland among the best colleges in the Northeast and one of the “greenest” schools in the nation. The Sierra Club echoed that “green” rating, naming SUNY Cortland to its most recent “Cool Schools” rankings for the College’s commitment to creating an environmentally sustainable culture on campus.