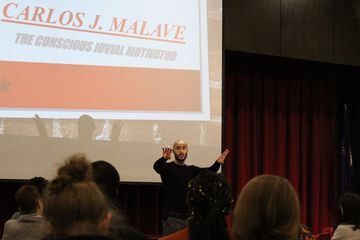 
Carlos J. Malave ’11 grew up in a bilingual household, communicating primarily with his father in Spanish and his mother in English.

Learning to translate between the two languages was a significant aspect of his youth.

As Malave grew older, he began to excel in sports. He was a star basketball player at Bellport (N.Y.) High School and earned a scholarship to play basketball and run cross country at Concordia College in Bronxville, N.Y. As gifted as he was on the basketball court, Malave found himself struggling in the classroom.

He learned how to uncover what made him a successful athlete and translate that into gains in academics and his personal life.

Malave returned to campus on Thursday, Feb. 1 to share some of those lessons and sign copies of his book, Translating Your Success: The Student Guide to Transforming Your Small Wins Into Big Wins. His talk, sponsored by Men of Value and Excellence (M.O.V.E.), kicked off the College’s series of Black History Month events.

After one year at Concordia, Malave transferred to SUNY Cortland, looking for a new opportunity to further his basketball ambitions. Despite his dedication to self-improvement — he shared how he arrived at Corey Gymnasium an hour before tryouts to run sprints — Malave eventually quit the sport to focus on his education.

Malave also gives motivational talks and shares his personal tales of failure and triumph on social media, including YouTube, Twitter and Instagram. Whether it’s in class or in a motivational setting, he wants to be a positive role model for the next generation of students who are looking for the guidance they need to succeed.

He named two of his SUNY Cortland professors as major influences.

“Virginia Wright in the phys ed department, she was that for me,” Malave said. “She was a performance art master in our P.E. classes. She was doing what I did up there when she was teaching a racquetball lesson. Dr. (JoEllen) Bailey, she was very influential because she allowed me to use my class clown ability to help people learn in her class.”

Malave, who serves on the SUNY Cortland Alumni Association Board of Directors, shared a story about his love-hate relationship with running that summarized his philosophy. No matter how fit you are, there comes a point during the run where an inner voice creeps in, pleading for you to stop and take a break. Malave gave that voice a name, “Charlie,” and talked about how he forces himself to battle the urge to quit.

“Every time I run, I learn to punch Charlie right in the face,” Malave said. “When I start beating that voice inside, no voice outside can bother me. When I look at running, it’s more of a challenge mentally than physically. That’s how I want you to look at life.”

During his time as a student, Malave interned for the Multicultural Life and Diversity Office, served as president of the Caribbean Student Association and was a resident assistant in Alger Hall.

The audience in the Corey Union Function Room laughed. They cried, too.

Malave hopes that his message seven years later — delivered in the very same room — came away with not only an emotional response but also with the steps needed to make positive changes in their own lives.