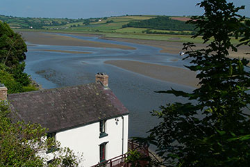 
Gregg Weatherby, a lecturer in SUNY Cortland’s English Department, will read from Dylan Thomas’ “A Child’s Christmas in Wales” and portray the poet and famous figure in literature on Thursday, Dec. 8, at the College.

Owen Thomas, who appeared in the children’s ensemble for the College’s 2013 production of the Charles Dickens’ “A Christmas Carol — The Musical,” will perform as the young Dylan Thomas.

Weatherby also will read from other works by the Welsh poet as well as selections from Irish poet W.B. Yeats and English poet W.H. Auden.

Originally scheduled for Dec. 1, the presentation will take place at 5 p.m. in Brockway Hall Jacobus Lounge.

The program continues the Cultural and Intellectual Climate Committee’s (CICC) yearlong series focused on the essential nature of art and imagination in society, titled “Art and Everything.” All events are free and open to the public.

The event also is produced by the Ad Hoc Theatre Collective, a local theatre group that first developed the “A Child’s Christmas in Wales” program. Weatherby has performed with the group.

The reading is dedicated to the memory of Robert Rhodes ’53, SUNY Cortland professor emeritus of Anglo-Irish literature.

Thomas was well-known for his dramatic readings during his lifetime, both on tour and on the radio. He is famous for poems like “Do Not Go Gentle Into That Goodnight,” “In My Craft or Sullen Art,” “Fern Hill” and “Death Shall Have No Dominion.”

His recent acting credits also include performances with the Ithaca Shakespeare Company.

“Art and Everything” is intended to examine the power and purpose of art across the disciplines.

The theme will facilitate and drive a wide ranging discourse that questions the function of art in our culture and examines the many ways art confronts current concerns of that culture, such as Black Lives Matter, gender inequity, climate change, gun violence, or growing economic inequality.

For more information, contact CICC co-chairs Scott Moranda, associate professor of history, at 607-753-2052 or Howard Lindh, scenic designer in the College’s Performing Arts Department, at 607-753-4101. The campus community is invited to visit @SUNYCortCICC to share their Twitter feedback on “Art and Everything.”