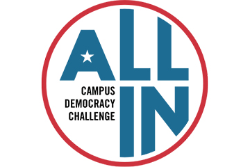 
Most SUNY Cortland students have an opinion about this year’s historic presidential election. Turning those opinions into actual votes that could help determine the leader of the world’s most powerful nation, however, is often a challenge.

That’s why SUNY Cortland recently joined the ALL IN Campus Democracy Challenge, a nationwide non-partisan competition that will pit the College against 145 other accredited institutions of higher education nationwide to see which campus has the largest percentage of students actively engaged in American democracy.

In addition to strengthening voter registration and participation efforts for the Nov. 8 election, the campus committee created as part of the ALL IN initiative will coordinate a range of student activities intended to educate first-time voters on the issues and on the importance of lifelong voter participation in a democracy.

“We joined not only for the sake of getting out the vote in the next election but to develop habits for a lifetime of civic involvement,” said Mary McGuire, an associate professor of political science at SUNY Cortland who directs the College’s Institute for Civic Engagement.

“We want students to think of themselves as voters: as part of the democracy in that way,” she said. “This generation is very active, very engaged in their community. They do a lot of volunteer work. But they don’t seem to make that connection that this is their chance to have a voice in public policy.”

Oct. 14 — the voter registration deadline — is a crucial date for organizers. But it’s not as important as Election Day.

During the last presidential election, a respectable 69 percent of all SUNY Cortland students were registered to vote. Only 49 percent of those registered students, however, actually cast ballots. That works out to only 34 percent of the total student population voted, which is considerably lower than the national average.

ALL IN campus organizers think SUNY Cortland is poised to turn that around this year. Generally speaking, SUNY Cortland, a campus where students regularly volunteer more than 200,000 hours of volunteer work, meets a high standard for community involvement. It has earned a place for eight consecutive years on the U.S. President’s Higher Education Community Service Honor Roll and was recertified by the Carnegie Foundation as one of fewer than 400 campuses nationwide with a community engagement classification.

By committing to the ALL IN challenge, SUNY Cortland agreed to create a campus-wide committee and embrace a specific set of actions. So far, six other SUNY colleges and universities have done the same. They will compete with schools across the country for the honor of being the most politically engaged campus in the nation.

In addition to the top honor, many bronze, silver, gold and platinum designations will be awarded to the campuses that meet certain participation benchmarks (gold for 70 to 79 percent, for example) or are the most politically engaged in certain categories.

Members of the campus ALL IN Challenge committee have organized or are still planning a number of challenge events and activities aimed at improving student election participation. The committee includes McGuire as well as John Suarez, service learning coordinator with the Institute for Civic Engagement; Michael Braun, president of the Student Government Association; Lauren Hermann, health educator with Health Promotion; and Skylin Baestlein, representative of the New York Public Interest Research Group.

Upcoming SUNY Cortland ALL IN initiatives include:

Suarez noted the ALL IN Challenge campaign dovetails nicely with the College’s long-term effort to involve students more in community decision-making. This could include helping to choose the composition of non-profit agency boards and participating in data collection relating to issues that are current and local. Examples include the discussion over a new Cortland County jail and decisions over whether gas stations can be built over the local source of drinkable well water.

“Students could help us in generating the data for making the decisions and in presenting the results to the county legislature, the Cortlandville board and planning commission,” Suarez said. “These are absolutely fantastic experiences. They are developing relationships in the community and also the knowledge and the dispositions to become informed, effective members of our community and a democratic republic.

“If students do that here, they are more prepared and apt to do so later on once they get into their careers,” Suarez said.

The ALL IN Challenge is a non-partisan Civic Nation Initiative, which fosters the idea that participation of informed citizens is of the utmost importance and encourages individuals to play an active role in the U.S. democratic endeavors.

The ALL IN concept was designed by the ideas42, a nonprofit behavioral design lab, and launched in mid-July after vetting by the American Democracy Project, The Democracy Commitment, and Student Affairs Administrators in Higher Education (NASPA).

The College was charged with convening a campus-wide committee, setting goals and developing an action plan. This course of action required being enrolled in the National Study of Learning, Voting, and Engagement (NSLVE). The NSLVE serves colleges and universities interested in learning about their students’ voting habits as well as tapping into a national database for research on college student voting and, more broadly, political learning and engagement in democracy.