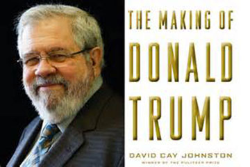 
David Cay Johnston, the Pulitzer Prize-winning financial reporter and investigator who wrote the 2016 best-seller, The Making of Donald Trump, will speak on Thursday, Sept. 28, at SUNY Cortland.

Johnston, whose reporting on tax policy resulted in a Pulitzer Prize in 2001, will discuss “Trump’s Rise and the Future of American Democracy” at 4:30 p.m. in Brockway Hall Jacobus Lounge.

Sponsored by the Political Science Department and the President’s Office, the talk is free and open to the public.

“Johnston has been investigating and writing on Donald Trump for more than 25 years and is universally recognized as an expert on Trump as businessman and as president,” said organizer Robert Spitzer, Political Science Department chair. “Given the confluence of national events, the timing of Johnston’s visit couldn’t be better.”

Johnston met Donald Trump in 1988 and in April 1990 revealed that Trump was no billionaire. When Trump announced his latest run for the White House in June 2015, Johnston immediately said Trump was serious this time and might get the GOP nomination. His reporting over the next year led to The Making of Donald Trump, published around the world in English and German by Melville House.

Johnston writes a weekly column for TheDailyBeast.com and Investopedia.com as well as frequent opinion pieces for USA Today, the New York Daily News, NationalMemo.com, the Rochester Democrat & Chronicle and TaxAnalysts.org.

He wrote a best-selling trilogy on the American Economy that is still in print: Perfectly Legal (taxes), Free Lunch (subsidies) and The Fine Print (monopolies). Johnston also wrote a 1992 casino industry exposé, Temples of Chance, and edited Divided, a 2014 anthology on inequality.

His forthcoming book, The Prosperity Tax: A New Federal Tax Code for the 21st Century Economy, will include both the legal language and an explanation of the economic, historical and legal reasons why America needs to remake its federal tax laws.

Recruited at 18 by the (San Jose) Mercury News, over the next four decades Johnston’s award-winning investigations appeared in that paper as well as the Detroit Free Press, Los Angeles Times, The Philadelphia Inquirer and The New York Times.

He was the first to expose Los Angeles Police Department political spying and brutality; wrote stories that saved hundreds of millions of dollars from being diverted from charities; and changed the way journalists report CEO pay by revealing aspects of executive compensation hiding in plain sight.

Long before economic inequality became a household concern, Johnston was documenting America’s growing income and wealth disparity, showing how little-known government policies take from the many to enrich the few. He also exposed how the law turns the income tax from a burden into a source of riches for many corporations and some individuals, including Donald Trump.

Johnston’s innovative coverage of tax issues in The New York Times from 1995 to 2008 exposed so many tax dodges and tax cheats that law Professor Richard Schmalbeck of Duke University called Johnston “the de facto chief tax enforcement officer of the United States.”

Two of the many tax dodges that Johnston’s reporting shut down were valued at more than $250 billion over 10 years, according to a congressional assessment. His articles prompted many federal and state laws, regulations and other changes and ended the careers of both Democrats and Republicans by revealing official misconduct.

Johnston’s work prompted the only major tax policy change by President George W. Bush, who quietly scrapped a plan to allow the wealthiest Americans and their heirs to escape most income taxes.

Earlier reporting revealed that President Bill Clinton and Hillary Clinton paid more than twice as much federal income tax as the law required, after spending almost $10,000 a year to have their tax returns prepared.

Johnston was the first national journalist to criticize President Barack Obama’s failure to fulfill his promise of transparency, writing just nine days after the president’s 2009 inauguration about policies that others would later confirm.

Since 2009, Johnston has taught the business regulation, property and tax law of the ancient world at Syracuse University College of Law. He has lectured on four continents about journalistic techniques, ethics, legal theory and tax policy.

Johnston also has served as a consultant on electricity regulation, rare earths and journalism for the Netflix series “House of Cards.”