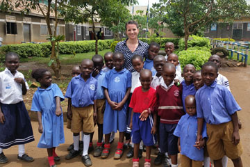 
Elementary school teacher Danielle Sweetman M ’15 is changing the lives of Ugandan children one book at a time.

Sweetman, who earned a SUNY Cortland master’s degree in literacy, was recruited to help The Literate Earth Project (LEP), a Philadelphia-based, non-profit organization that works with primary and secondary schools in Uganda to build libraries from the ground up.

Although she works full-time teaching fifth grade in Augusta, Ga., Sweetman has volunteered as an LEP board member since 2013 and currently serves as director of literacy. 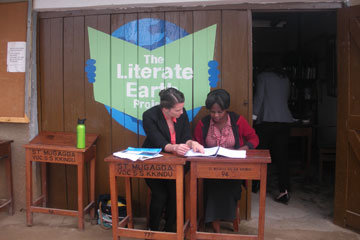 That probably won’t come as a surprise for those who knew her at SUNY Cortland, where she served as lead toddler teacher at the College’s Child Care Center.

Prior to LEP and before enrolling at SUNY Cortland, Sweetman worked as a founding kindergarten teacher at Lanning Square Primary in Camden, N.J.

In Georgia, where she lives with her husband and stepdaughter, Sweetman aspires to move her teaching career into literacy coaching or literacy intervention.

In Africa, where she traveled in 2015 to help make some of LEP’s Uganda libraries more effective, she experienced new literacy challenges. Working with the children in those communities was a transformational experience, Sweetman said.

“All the schools, children, teachers and the community in Uganda are the happiest, joyful, most kind people I’ve ever met,” said Sweetman. “People have this pre-conceived notion that they’re different from us, and they’re not.”

To succeed, however, these wonderful youngsters must overcome an almost non-existent educational system.

In the vast majority of schools in Uganda, students learn from composition notebooks. Their schools have just one or two copies of each textbook needed for dozens of students. Those books get copied, by hand, into those notebooks. If students want to learn about anything beyond what is in their class and textbook, there is no resource for them. Without access to computers or additional books, they reach a wall whenever their interests are piqued in a new area. LEP aims to eliminate that barrier.

In 2013, the organization built its first library, but disappointingly saw limited success and use by those in the community. That’s when founder and CEO Jeff Fonda called on Sweetman, his former undergraduate classmate at SUNY New Paltz.

For six months she pored over training and evaluation documents from organizations such as the United Nations, Room to Read, and from dozens of local, regional and international stakeholders within the education community.

“Danielle pulled out the really valuable stuff from dozens of organizations and created a comprehensive and concise document, but it was more than that,” Fonda said. “You can’t just drop a 50-page packet in front of someone who has never run a library and expect it to operate properly. She had a huge part in turning our organization around.”

Sweetman traveled to Uganda in April 2015 to work with Ugandan librarians one-on-one and make sure the library system was running efficiently.

“We learned that getting the community involved in the library was the key to our success,” Sweetman said. “I realized that the LEP system didn’t give our partners on the ground the tools they needed to engage the local population and ensure the library was used.”

Since then, the organization has successfully opened nine libraries. LEP brings in 3,000 leisure books, furniture and Ugandan syllabus books once each library is prepared to open. Sweetman maintains that communication between libraries and the two project managers who oversee their Ugandan staff is essential to ensure that they are fulfilling their operating duties. It also helps ensure the books are treated properly.

This July, the Coram, N.Y., native will return to Uganda to train project managers for a two-year data collection survey. The survey will be administered in schools near the libraries to get community feedback about the libraries. She plans to tweak USAID’s literacy evaluation program to track LEP’s literacy progress.

“While we have anecdotal evidence that our libraries are having an impact, both from what we’ve seen and been told by teachers, by 2017 we will be able to prove it with hard data,” Sweetman said.

Within the next year, Sweetman hopes to organize a conference in Uganda to allow librarians to share ideas and processes with each other.

Eventually, the LEP team plans to expand its impact to neighboring countries, including Ethiopia.

For more information on LEP and Sweetman’s work, visit the theliterateearthproject.org.