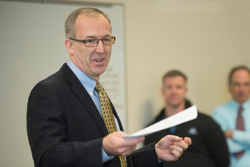 Sankey returned to the College this past fall for a two-day executive-in-residence stay, speaking to students about current topics in college athletics. As commissioner, he’ll be one of the most visible leaders in the NCAA and will lead one of its most powerful athletic conferences. The SEC produced college football’s national champion seven consecutive years from 2006 to 2012.

Following the announcement, presidents and chancellors of SEC institutions praised Sankey as one of the best leaders and sharpest administrative minds in college athletics. He’s in his 13th year with the SEC and has proven to be an integral part of the conference’s efforts to rethink its governance, enforcement and compliance program. He also has overseen the SEC’s championships staff.

Sankey is active within the NCAA committee structure, which includes his service on the Division I Legislative Council, Committee on Academic Performance and the NCAA Committee on Infractions, which he currently chairs. In June, he offered testimony in the historic O’Bannon v. NCAA case regarding compensation for student athletes.

Sankey, a former baseball player and an avid marathon runner, earned his master’s degree from Syracuse University. He resides in Birmingham, Ala., with his family.