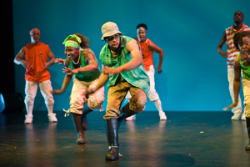 The dance troupe’s show, rooting in the tradition of early African-American fraternities and sororities, is part of the 2011-12 Campus Artist and Lecture Series (CALS). It will begin at 8 p.m. in the Corey Union Function Room.

“This is a culturally rich experience that should hold a large appeal for both our campus and the Cortland community,” said Sandra Wohlleber, the College’s assistant director for campus activities and Greek affairs.

Tickets cost $5 for general admission and $3 for SUNY Cortland students. Children 10 years old and younger will be admitted for free. Tickets can be purchased in Corey Union, Room 406, or one hour prior to the performance outside the Corey Union Function Room.

The group has gained international fame for using the stepping tradition as an educational tool, earning national news coverage on CNN, NPR and ABC News. Wohlleber said the local performance is an opportunity to learn more about culture-based Greek organizations at SUNY Cortland. Formed in 1994, Step Afrika was the first professional company to dedicate itself to the stepping tradition, a unique type of dancing that uses a combination of footsteps, claps and spoken words to create rhythms and sounds; turning the human body into a musical instrument.

“Some of the elements contained within the Step Afrika program are also a part of some of the activities led by our fraternal organizations,” she said.

The practice of stepping grew out of African American fraternities and sororities in the early 1900s, when students used it to demonstrate allegiance to a group.

Fast-forward more than a century to a time when stepping has become popular at U.S. colleges, schools and churches. Step Afrika, which is based in Washington, D.C., has grown to the point where it embarks on an annual 50-city tour of colleges from Maine to Mississippi.

In between the stomps and claps that come with the dancing, the group promotes themes such as teamwork, academic achievement and cross-cultural learning. It also conducts residencies and holds classes at the John F. Kennedy Center for the Performing Arts, the Washington Performing Arts Society and the Smithsonian Institution.

“One thing about this event, it will tie in quite nicely with our campus priorities,” said Wohlleber, referring to the College’s commitment to academic excellence and transformational education.

The Feb. 13 performance marks the third of four major CALS events held at SUNY Cortland during the 2011-12 academic year. For ticket information or questions regarding the Step Afrika event, contact the Campus Activities and Corey Union Office at (607) 753-5574.