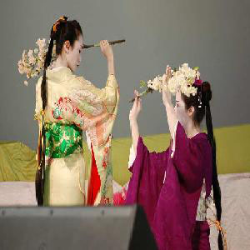 
Artist, international choreographer and arts educator Sachiyo Ito and her dance company will present a traditional Japanese performance at 2 p.m. on Sunday, March 24.

This cultural event is part of SUNY Cortland’s 2012-13 Campus Artist and Lecture Series, and will take place at 2 p.m. in the Corey Union Function Room.

Admission is $3 for SUNY Cortland students, $5 for faculty, staff, and the general public, and is free for children 10 and under. Tickets can be purchased in Corey Union, Room 406, or beginning one hour prior to the performance at the Function Room.

Sachiyo Ito and Company, based out of New York City, performs and teaches classical dance all over the world. Dance forms such as Kabuki, Noh, Okinawan Court and Jiuta-mai are choreographed by Ito and preserve the aesthetics of traditional Japanese dance.

According to Tokyo native Ito, art is a form of communication, especially when it comes to dance.

Performances from Sachiyo Ito and Company bring East and West together, and have been dedicated to creating a cultural bridge between the United States and Japan for more than 30 years.

A not-for-profit arts organization, Sachiyo Ito has as its purpose to create a better understanding about the feelings and cultures of others.

Ito has choreographed numerous productions, including off-Broadway shows, in the United States and Ireland, and has performed all over the world.

She received the prestigious Foreign Minister’s Award from the Japanese Foreign Ministry and was awarded the name Sachiyo Fujima from the Fujima School of Japanese classical dance in Tokyo. Her performances have received glowing reviews in The New York Times and The Village Voice.

For more information, contact the Campus Activities and Corey Union Office at 607-753-5574 or visit the official Web page for Sachiyo Ito and Company, www.dancejapan.com.