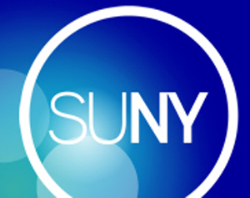 
Joanne Barry, SUNY Cortland’s assistant vice president for human resources, has earned the State University of New York’s Lifetime Achievement in Human Resources Award for her career contributions on campus and throughout the state system.

“Whether personally championing creative solutions or supporting human resources staff who are working to develop and implement HR best practices, Joanne is masterful at understanding how to maneuver an often unpredictable environment to advance initiatives,” wrote Wendy Cranmer, the College’s assistant Title IX coordinator, in a recommendation letter.

Praised as an unflappable leader by faculty and staff members from across campus as well as several external constituents, Barry’s guidance has positively influenced countless SUNY Cortland policies and procedures.

Internal promotion, interim appointment and workplace bullying policies all have been enhanced during her tenure. Additionally, programs have taken off that include alternative work schedule, phased retirement, and faculty and staff onboarding and leadership training.

Several colleagues noted her ability to adhere to legal and ethical standards while offering creative solutions that are fair.

“Under Joanne’s leadership, our Human Resources Office has taken a very proactive approach in promoting more positive interactions among campus employees, rather than just addressing problems when they arise,” wrote Bruce Mattingly, the College’s dean of the School of Arts and Sciences.

Others called attention to the campus-wide impact of her work.

“Classified staff have the opportunity to take webinars and workshops to improve their writing, communication and technological skills,” wrote Andrea Lachance, the College’s dean of the School of Education. “Faculty and staff have opportunities to develop their leadership and conflict resolution skills.

“Through her support of these initiatives, Joanne has illustrated her belief in lifelong learning and growth in the work place.”

Barry joined the SUNY Cortland staff in 1990 as a personnel associate and was promoted to senior personnel associate/affirmative action officer in 1997. She assumed leadership of the Human Resources Office in 2000 when she was appointed director of personnel. In 2007, she was elevated to assistant vice president for human resources to accurately reflect the scope and complexity of her position.