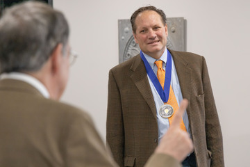 
John Foley, a member of the Physical Education Department, has been named a Distinguished Professor by the SUNY Board of Trustees. This title is awarded to individuals who have achieved national or international prominence within their chosen field and serve as role models for students and faculty.

This distinction is attained through significant contributions to the research literature or through artistic performance or achievement in the case of the arts. Distinguished professorships are conferred upon individuals who have elevated the standards of scholarship of colleagues both within and beyond their academic fields.

One of the leading experts on adapted physical activity in the nation, Foley, who currently serves as the director of Cortland’s Activity and Movement Pedagogy Laboratory, has authored an average of five publications per year since 2008. His work has been published in Adapted Physical Activity Quarterly, the most prestigious journal in the field, as well as the Journal of Intellectual and Developmental Disability; the Journal of Physical Education, Recreation & Dance; Research Quarterly for Exercise and Sport and Research in Developmental Disabilities.

His publication record has international reach within and beyond his discipline, sharing his significant contributions to the knowledge base of physical activity both within the United States and around the world. Foley has presented at more than 90 academic conferences, including the International Symposium of Adapted Physical Activity at Gävle, Sweden, the Canadian Society for Exercise Physiology Conference and the International Forum on Subject Planning and Development for Sport Science in Beijing, China.

“Prof. Foley is, unequivocally, one of the leaders in North America and extremely well known internationally as a scholar in adapted physical activity who has made significant, original contributions to his field,” said Jeffrey Martin, professor of kinesiology at Wayne State University.

Foley has been a principal or co-principal investigator on external grants totaling more than $900,000. His ensuing research has led him to collaborate with colleagues and organizations including Special Olympics Canada, Cornell University’s Institute for Labor Relations, the Virginia State Department of Education and the U.S. Department of Education.

In 2010, he was elected president of the North American Federation of Adapted Physical Activity, the highest office of the primary research organization in his field. Foley was named a fellow of the research consortium of the American Association of Health, Physical Education, Recreation and Dance in 2011 for his significant and sustained contributions to the scholarship of the society. U.S. Games presented Foley with an OPEN award in 2017 for the standards-based physical education curriculum he helped develop that has been used by more than 80,000 teachers.

He has been invited to review manuscripts for many journals and sits on the editorial boards of American Journal of Health Promotion and Adapted Physical Activity Quarterly.

The Board of Trustees expects distinguished faculty to function as leaders and devote appropriate service to University-wide activities, both ceremonial and professional, such as offering lectures and seminars, informing curricular reform, improving the overall academic experience of students, mentoring junior faculty, and leading inquiry into issues of importance to SUNY and society.

Foley earned his B.S. in physical education from California State University, Hayward, in 1992, his M.S. in kinesiology from Hayward in 1998 and his Ph.D. in exercise and sport science from Oregon State University in 2005. He joined SUNY Cortland in 2005, was promoted to associate professor in 2008 and professor in 2012.