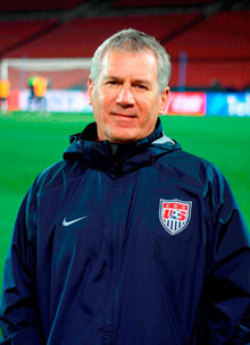 Registration for the day’s program, which includes lunch, costs $25 for the public and $10 for students. Mandelbaum’s session, scheduled from 2 to 3 p.m., is free and open to the public.

For more information, or to register for the symposium, contact Philip Buckenmeyer, associate professor and chair of kinesiology, at (607) 753-4300 or via email.

Mandelbaum, a 1975 SUNY Cortland graduate and an orthopedic surgeon with the Orthopedic Surgeon Group of Santa Monica, Calif., served as team physician to the U.S. World Cup team four times between 1994 and 2006. He was chief medical officer during the 1999 Women’s World Cup. Mandelbaum is currently head orthopedic physician at Pepperdine University and assistant medical director of Major League Soccer.

In 2009, SUNY recognized Mandelbaum with an honorary Doctor of Humane Letters. He has received three national awards for excellence in sports medicine research, including the prestigious Dr. Ernst Jokl Sports Medicine Award in 2006, an honor previously bestowed on renowned four-minute miler Roger Bannister.

At the SUNY Cortland symposium, Hal Luther, the director of strength and conditioning at Syracuse University since 2007, will discuss the proper shape of football players from 9 to 10 a.m. Luther coached more than a dozen future NFL players during his tenure at Syracuse.

Otto Janke, M.D., of Janke Family Chiropractic in Cortland, will discuss posture problems in athletics from 1 to 2 p.m.