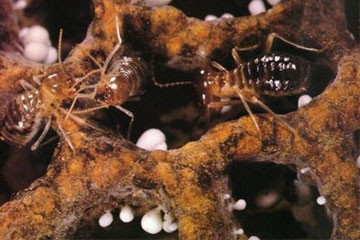 Yes, it’s time to make that nasty pest, who’s busy right now turning someone’s house to brown mush, pause and take a bow, at least in parts of Africa. There, many species cultivate on their nests fungi that will eventually end up in a chef’s cookpot.

Dawit Abate, a Fulbright Visiting Fellow and professor of mycology at University of Ethiopia, Addis Ababa, will visit SUNY Cortland to explain the unique behavior on Thursday, March 22.

Abate, from the University of Ethiopia’s Department of Microbial and Cellular Biology, will discuss mushrooms that have been farmed by termites for thousands of years in Africa in a talk titled “Mushrooms (Termitomyces) Farmed by Termites in Africa: Diversity, Utilization, Ethnomycology.”

Abate will showcase their spectacular castle-like mounds where the farming occurs, and how humans have adapted to using the mushrooms created through this relationship between insects and fungi, starting at 6 p.m. in Bowers Hall, Room 1129.

The event, which is free and open to the public, is hosted by the College’s Biological Sciences Department and Biology Club with support from the President’s Office, International Programs Office and the Clark Center for Global Engagement.

“We have none of these kinds of termites cultivating mushrooms in the New World, they are only Old World,” said SUNY Cortland Distinguished Professor Emeritus Timothy Baroni,  a biologist who specializes in mycology (fungi). Baroni is part of a group of researchers investigating a possible New World connection: mysterious insect nests in Colombia where fungi appear to be cultivated. The animal doing the planting and harvesting has yet to show its face, however.

Certain species of African termites chew up wood into their huge nests, seed it with fungi, ventilate their gardens, and feed their families off of the outgrowth.

The maligned insect probably has farmed mushrooms for tens of thousands of years, much longer than humans have cultivated their food, according to Baroni.

“These mushrooms appear to be tightly intertwined with the evolution of the insect,” he said of the African farming termites.

“We might be able to learn from them. They’ve been successful for a long time.”

Abate is currently a Fulbright Visiting Fellow at the Institute for Food and Agricultural Sciences, University of Florida, where he is working on methods for controlling fungal diseases in cultivated mushroom crops.

He has previously served as a program officer in the United Nations Office for Project Services in Windhoek, Namibia, from 2001 to 2003.

Abate also has served as dean of the Faculty of Life Science at Addis Ababa University.