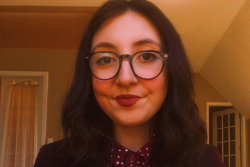 
Amelia Ponirakis is not your average, 18-year-old high school senior. She’s also a respected filmmaker with eight years of experience, having started at the age of 10 by making stop motion shorts with her Pokémon toys and American Girl dolls.

Later this month, one of her movies will be shown on the big screen at SUNY Cortland’s Blackbird Film Festival for the third year in a row. This year’s festival will screen 83 independent films from a wide range of genres. It will be held from April 26 to 28 in SUNY Cortland’s Brown Auditorium

Ponirakis’ young age isn’t the only thing that sets the Homer High School student apart from other Blackbird artists. Her filming technique is unconventional. Instead of a digital camera she uses vintage Bolex and Super 8 film cameras to create her projects.

“It’s a little more work you have to put into it,” Ponirakis said. “I like that challenge about those cameras because it makes it fun.”

Ponirakis, the daughter of Caroline Kaltefleiter, a professor of communication studies at SUNY Cortland, was 15 when she received her first camera for Christmas, which enabled her to focus more on her craft.

In February 2017, she won a Gold Key from the Scholastic Art & Writing Awards, the largest annual art competition in the nation, for her first film, “Solitude.” It was screened at the 2017 Blackbird Film Festival where she won a Special Jury Award.

“It was the last day of fall before the winter came, so I just played around with the camera and got a feel for it,” Ponirakis said about her first film.

In the summer of 2017, she attended New York State’s Summer School of the Arts program for media arts where she was introduced to Bolex and Super 8 cameras. She also learned about film history and found her admiration for experimental filmmakers like Maya Deren and George and Mike Kuchar.

Being a participant in the Blackbird Film Festival for so long, Ponirakis has been inspired by many of those she has met, including the older generations looking out for the youth entering the film world.

She recalled a conversation she had with the festival’s executive/artistic director and lead festival programmer, Samuel Avery, an assistant professor in the Communication and Media Studies Department. He expressed empathy for young filmmakers like Ponirakis and said he was reminded of his own youth as an up-and-coming creator and the difficulties that come with trying to enter film festivals.

“I remember him saying that when he was a kid, when he was 13, he was trying to send his work off to festivals,” she said. “So he says he kind of sees a little bit of him in me and I thought that was really sweet that he gave me the opportunity to do that at such a young age in high school, where it’s kind of hard to have your voice heard.”

This year at Blackbird, Ponirakis will show her newest film, “Pesky Landline.” The film was inspired by 1960s commercials about women and how they should dress and act.

“I decided to poke fun at that and smash the patriarchy,” Ponirakis said. “Because women should just be who they want to be and don’t have to fit into the cookie cutter mold of the perfect woman.”

She will also be participating in the Silents Roar! Film Festival at the Wharton Studio Museum in Ithaca, N.Y., where she will screen her 2018 film, “Farm Sanctuary.”

Ponirakis’ interests in the cinema world don’t stop at directing. She is also very intrigued by sound design, editing and cinematography. After high school, she will study filmmaking at SUNY Purchase, where she hopes to explore and learn about the different paths she can take.

“Pesky Landline” will be screened as part of the “Albany to Buffalo” block of the Blackbird Film Festival, a celebration of local filmmakers from upstate New York. The block begins at 7 p.m. on Saturday, April 27.

Admittance to film screenings, the filmmaking roundtable and the Seed & Spark workshop is free. A VIP pass that includes access to all screening blocks and special events is available for $20.