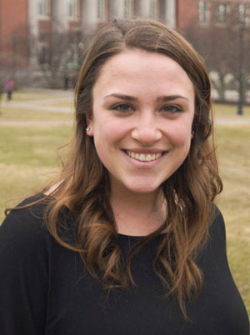 
SUNY Cortland senior Katie Smook remembers what it’s like to start out learning a new language. She’ll take those memories to Spain this summer after winning a Teach Abroad Award from the Council on International Educational Exchange (CIEE).

Smook, a dual major studying Spanish and psychology, will teach part-time in Madrid for a full year starting in early September. The Wantagh, N.Y., native will work as a teaching assistant, going into classrooms to help both students and teachers learn and improve their English-speaking skills.

The prestigious award from the CIEE includes compensation for living expenses.

Smook’s initial career path, however, never involved teaching, she said. She originally planned to become a school counselor but something pulled her in a different direction. As a student who excelled upper-level Spanish courses, she saw the expected frustrations other students faced as they attempted to pick up a new language.

“I realized that if I could help a student facing the same challenge of mastering a new language, I would be helping them acquire a skill they will use for the rest of their lives,” she said.

Smook traveled to Barcelona in the fall of 2012 through SUNY Oswego’s study abroad program and became immersed in the culture. She’s had a strong desire to return to Spain ever since, figuring her first months after graduation in May would be an ideal time to make the move.

Despite being well versed in the Spanish language, Smook says her biggest challenge abroad will be assuming the role of a teacher. She hasn’t yet received formal training as a classroom teacher.

“This is completely new for me, so I think it will be challenging, at least in the beginning,” said Smook, who suggested she might be teaching some students English for the first time.

Still, if that challenge comes, she’s ready to face it head on — even in a new country.

Smook has worked with the International Programs and Admissions offices at SUNY Cortland while also participating in the Psychology Club, the Youth Assist Program and Sigma Delta Tau sorority at the College.

Graduate school might be in her plans when she returns from Spain in 2015, she said.

“Maybe I'll decide I want to be a teacher instead of a school counselor, or maybe I'll decide to stay in Spain,” she said. “I am excited to see where this experience takes me.”

For more information about the Teach Abroad Award, visit the CIEE website.