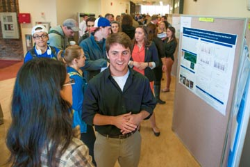 
SUNY Cortland will showcase the College’s top academic work across all disciplines with “Transformations: A Student Research and Creativity Conference” on Friday, April 8.

Celebrating its 20th year in 2016, Transformations features nearly 70 different projects involving more than 125 undergraduate and graduate students. The event, which is free to attend and open to the public, takes place from 12:30 to 5:30 p.m. in Bowers Hall and Sperry Center. Classes will be held as scheduled during the conference.

“Transformations marks one of the biggest days of the academic year and deservedly so,” said Bruce Mattingly, dean of the School of Arts and Sciences and chair of the conference committee. “Our students, with the guidance and support of their faculty mentors, have invested countless hours in their impressive scholarly work.

“This is a hard-earned opportunity to share their research and creativity with the larger campus community. Presenting at Transformations serves as a major accomplishment in the college careers of our most promising students.”

An afternoon of student-led presentations and poster sessions follow a keynote address from John Ryder ’73, SUNY Cortland’s former dean of arts and sciences who now serves as provost and vice president for academic affairs and student success at American University of Ras Al Khaminah in the United Arab Emirates. In 1997, when he was the College’s dean of arts and sciences, Ryder was responsible for establishing Scholars’ Day, the event that preceded Transformations.

Ryder’s talk, titled “The World of Scholarship and Scholarship in the World: Life After Cortland,” begins at 12:30 p.m. in Bowers Hall, Room 1129. Complimentary refreshments will be available from 2:30 to 4:30 p.m. in the first-floor service area of Sperry Center.

In 2011, a special planning committee renamed and reorganized Scholars’ Day to reflect the College’s strategic priorities of providing a transformational education and fostering academic excellence. The day’s activities continue to highlight student achievement and encourage scholarship in the future.

Among this year’s many topics representing a variety of different academic departments:

A complete list of projects can be found in the Transformations program.

Ryder, who specializes in American philosophy and boasts extensive experience in international education, has worked full-time overseas for nearly six years. This summer, he will become the founding provost of the American University of Malta, a European island country located in the Mediterranean Sea. He previously worked as director of the SUNY system’s International Programs Office and was the president of a university in the Eurasian country of Azerbaijan before taking his current job.

From 1980 to 2002, Ryder put together a distinguished career at SUNY Cortland beginning as a lecturer of philosophy. He eventually chaired the College’s Philosophy Department and co-founded the Project for Eastern and Central Europe. Ryder served as dean of the School of Arts and Sciences from 1996 to 2002 before directing SUNY’s Center on Russia and the United States, which created various exchange programs between the system and Russian institutions.

Ryder also has helped establish dual-degree programs with higher education institutions in China, Mexico, Turkey and several other countries. From 2002 to 2012, he served as president of the Alliance of Universities for Democracy (AUDEM), which united scholars representing all academic disciplines from the U.S. as well as Central and Eastern Europe.

His own research focuses on issues in systematic ontology and epistemology as well as social and political philosophy. Ryder has authored and edited many published works, most recently including The Things in Heaven and Earth: An Essay in Pragmatic Naturalism (Fordham University Press, 2013). His papers have been translated and distributed throughout Europe, where he continues to tour universities and conferences as a guest speaker.

Transformations is supported by the President’s Office and the Provost and Vice President for Academic Affairs Office. SPARK, formerly known as the Student Alumni Association, provides volunteers for Transformations.

For more information, including the complete schedule of events, visit the Transformations Web page at cortland.edu/transformations or contact the School of Arts and Sciences at 607-753-4312.